Yesterday we heard that Stephen Bannon was quitting Breitbart, allegedly because of pressure to fire him. Since his remarks about Kushner, Trump Jr, and treason, the man has lost key supporters among the fascist fringe.
He is now a liability to the Republican masterminds.

But, more likely, it is because he actually has lost his mind, as the President avers. In recent years he has not been as mentally acute as previously, and a reckless lifestyle may have wreaked havoc. At least that is the rumour going around, with several sources having commented about his wrecked appearance, evident signs of age, liver spots, and disregard for personal grooming. Bags under the eyes, and that florid puffiness.

He needs rest and rehabilitation. 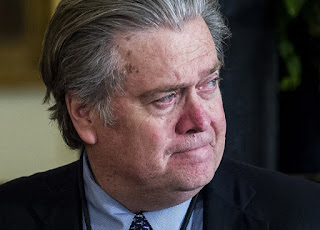 Far be it from me to recklessly speculate. Yes, I have seen severely beat-up alcoholics and syphilitics who looked better, far better, but he is an old man now, and the wear & tear of being a meanspirited flesh-eating ghoul for all those years may have finally started taking their toll.
Or a daemon is coming for him.


If it's just a spot of ill-health or mental problems, bathing in the blood of virgins will alleviate the condition. It's worked for several Republicans.


Stay away from holy water, Steve.
It would burn you.