When I woke up it was with a vivid beautiful dream still playing. Sunlight, late breakfast at a non-existent Anglo Indian hotel in Chinatown. Keema, flaky kulchas, achar pulgobi, and a cup masala chai. I complimented the proprietess on getting the operation up and running in such exemplary fashion in so short a time. Of course there is no such place. No sunlit dining room. No Anglo Indian hotel, alas. And no place near Grant Avenue or Waverly with excellent keema (no damned peas) or hot strong masala chai. No flaky kulcha.

The first problem with keema at most places is the peas. Keema matar is okay, but Indians are way too fond of peas (matar), and will throw the blighters into anything that moves. The second is that the ground meat used for keema is often from the fatty part of the beast, and the resultant dish too greasy to go well with nice flaky kulcha or buttery naan. This breakfast would be heavy enough for a Midwestern farmer, but I couldn't possibly hack it.
A Parsee would probably add a poached egg or two on top.
No, most Parsees are not rotund.


It was a very intense dream. I still have the taste of the keema and kulcha in my mouth.


Why isn't there an Anglo Indian Hotel in Chinatown? There's a Nepali grocery. There used to be an Indian restaurant. There are tourists. And there is, in fact, a hotel where visitors might stay. Two of them. One international luxury standard digs, so the usual "five star" quality that Americans feel comfortable and secure about (bland neutrality, sumptuously unappetizing breakfast food), and the other hotel smaller and more interesting looking, like a place where middle aged Europeans, Parsees, elderly Hong Kong businessmen, and Dutch Indonesian exiles might feel comfortable.
There is actually a third one, but it's right on the border, and late night hamburger or pizza eaters remember it from a previous life. Hard to even guess what it's like. It has garage facilities, so it probably caters to Americans.


The only two Indian restaurants arguably near Chinatown now, are one place which doesn't change the tablecloths often enough, and another which is a skeevy halal place probably connected to that nasty little Uttar Pradeshi cook with whom I used to work, so I will never go there because I might get poisoned. I do not want to get poisoned. It would interact badly with the medications that currently give me such vivid dreams. A bad idea.
I once argued with and fiercely shook the blighter.
Plus I distrust his unclean habits.


The very best kulchas, by the way, were made by a Mexican who has gone back to Mexico City and now probably runs an eatery staffed by his children and other relatives. 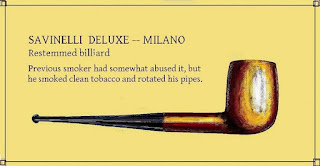 The only part of the dream which can translate into reality is the pipe I intend to smoke after breakfast (late lunch). A very snazzy Italian number, jaunty and suitable for a sporty man. Which I am. Got a proper tweedy coat too, which would go with that image, which I shan't put on today because instead I'm wearing a sweater and intend to have the somewhat ratty coat with the multiple pockets in which briar and tobacco pouch fit. Milk tea and a snack somewhere. No keema, no roti pao.