A COMPLETE ABSENCE OF 'URK'

At precisely two thirty, give or take ten minutes, the 菠蘿叉燒包 come out of the oven, hot and fresh. Delicious! Worth waiting a little bit for. Unfortunately, a lot of other people know that too. So if you arrive early, you can sit. Otherwise you'll be fighting the locals for space. No, I shall not mention where this is, because I don't need any competition for seating.
The milk tea is excellent too, by the way.

A pipe smoked afterward, perhaps while ambling along Waverly, is a joyous occasion.


The fresh 蛋撻 are ready at around five-ish. I only mention this so that you will be more inclined to go there later. I really do not need competition for the seats.
Or noise. I don't like noise.

Because the place had filled up with Toishanese speakers I did not dawdle but finished my snack and beverage and left. There were also too many of my fellow 鬼佬 there by then.
I may have mentioned that I don't like competition?


The title of this post refers to the sound I sometimes make upon arriving home. Both my apartment mate and myself have gotten into the habit of making little noises when entering, because what with both being on the spectrum and slightly deaf, we startle easily. The sounds are variously 'urk', 'naarp', 'baah' or 'beh', plus 'oop ack'. That last being copied from Bloom County's resident headbanger dissolute feline, Bill The Cat.
I am more likely to do that last one.
But today, it was 'urk'.


There was nobody home. So no response. Earlier she had been speculating about earwax. Did Christ have earwax? Did the Habsburgs? And what was it like? According to her, white people's earwax is gummy and yellow, often rancid or smelly, whereas East Asian earwax (hers) is more of a fine semi-crystaline substance, and often looks like origami when extracted. And really, I should look this up on my computer. 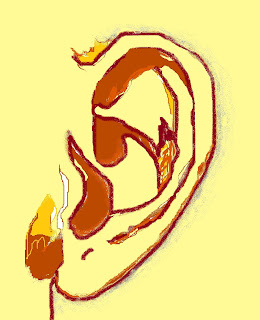 When I protested that she too had a computer in front of her she objected that her computer was reserved for clean pure subjects, like estate jewelry shopping and educational youtube videos. So mine was better. And I should also look up "celebrity boogers".

No. I do not wish to know what Will Smith and Jada Pinkett's boogers are like. Or Kardasian nose crap. Not my interests. Nor the reliquaries holding Elvis Presley's extrudite.


There are four things that keep growing throughout life.
The prostate, the ears, and the nose.
And lobsters.