Sometimes (very often) I am staggered by the things that still live in American society. If anything, Black Lives Matter has shown that in some strata good old-fashioned racism and bigotry is still alive and kicking, particularly among "nice" Christians, honest salt-of-the-earth rural folk, and honest-to-goodness elderly retirees and douchebags in Florida, the sunshine and rightwing dictatorship revival state headed by supreme iguana Ron DeSantis.

The civil rights struggle did not end in the sixties.
And there has been some regression.


Yeah okay grampa, we need to put you to bed now. That caller was cut-off and is now yelling at the nurses about freezums of speech. While dribbling grey spit on his plastic bed liner. And no, I will not apologize for the sneering ageism in that remark. I've got grey hair and arthritis myself, so I'll say whatever I damned well want about the over forty crowd, just like I do about the under forty crowd. There are people in both of those demographics who need their heads examined. Cut into thin slices and slipped under a microscope.
There's something wrong there.

Listen, eighty three year old dude, when you were a little boy we put Japanese Americans in camps, Al Jolson was still smearing on blackface and singing 'Da Camptown Races' as E. P. Christie And His Ethiopean Serenaders ("doo da, doo da"), and black people couldn't vote in most of the country. Harvard had a "Jewish problem" and Irish people weren't allowed into country clubs. 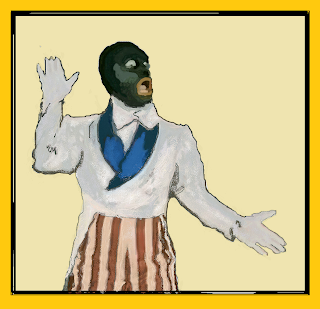 That was also the day and age when freedom of speech was fine, perfectly fine, as long as what came out was white and Anglo-Saxon Protestant. No commies!


I would argue that there has been progress since then.
Things have improved a little bit.
Okay?