They're closing permanently in less than a week, as their social media announcement made clear. Having been a customer for ever a decade, I am of course sad to see them go. The owner retired four or five years ago, as did the long-time main woman on the floor about two years ago. But the daughter ran the place until Covid and the City of San Francisco together combined to be a pain in the nethers, and despite a valiant attempt to keep the aspidistra flying they decided to throw in the towel.

A typical Hong Kong chachanteng. With interesting stuff on the menu.
I decided to go there for old-time's sake.

I'll probably go there again before the weekend. See if they can still do a club sandwich (公司三明治 'gong si saam ming ji'). Might be iffy.
Maybe french toast.
西多士。

[Hong Kong French Toast ('sai do si') is two slices of white bread glued together with peanut butter, battered and fried, served with a pat of melting butter, and a cruet of golden syrup on the side. Sometimes it is also drizzled with chocolate syrup and sweetened condensed milk. Ask your doctor about this, then watch his or her face.]


Ran into Ah Choi while smoking a pipe outside afterwards.
Apparently he gave up ciggies three years ago.
The taxes probably got to him.
Prohibitive now. 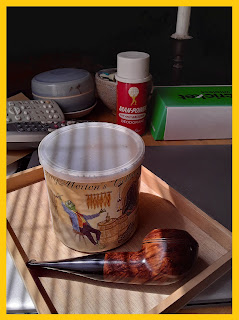 PLUS DEODORANT FROM THE SEVENTIES!

Fortunately I stockpiled enough pipe tobacco over the years that that is not an issue for me. The tin with the tipsy looking frog on the label above is evidence of that. McClelland, which made the product, closed their doors over foor years ago, and regular smokers of their blends were bereft. Despondent. Despairingly operatic. Quite desolated.
It was a good afternoon.

By the way, there are too many white people in Chinatown. Between the maskless tourists gaily spreading disease and the crazy man in Portsmouth Square who screamed at me, the place is changing. The police really ought to do something about them.
There should be only one Caucasian there.