Several years ago I lived closer to Kearny and Jackson Streets, and there were three places where one could get northern style dumplings late at night. You'd take a break from reading, pack a pipe and a pouch of tobacco in a coat pocket, and head over to any one of them. You might also put the book in the other pocket, because from order to eat would be twenty minutes, which is a mighty long time by yourself.

You could be wired to the eyebrows on the pot of tea by then.

A small dipping saucer would be ready, red vinegar, soy sauce, chili paste were on the table, and you'd look forward to hot juicy chives and pork (or cabbage and pork -- different place) wrapped in a tender dough skin.

Every Chinese mom makes dumplings.
Not all restaurants do.

And Cantonese people have never quite developed a taste for the northern 蒸餃 ('jeng gaau'; zhēngjiǎo) of the long winter and the cold. Which starts just below Shanghai and continues up beyond Shenyang. The Shanghainese make good dumplings. So do mainland exiles in Taiwan. They are also popular in Japan and Korea I've heard. 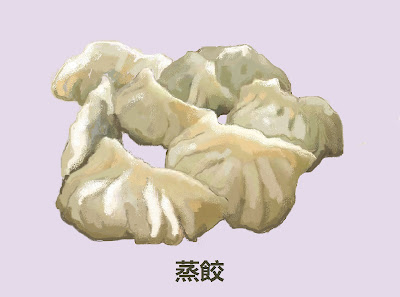 There are only two places that I now know in Chinatown that do them. There are probably more, but I refuse to patronize the popular and overpriced Szechuan-Hunan joints that cater to westerners (only somewhat because my Cantonese is not understood there).

The Bund Shanghai Restaurant (上海飯店 'seung hoi faan dim') does have a number of staff members who speak Cantonese, and they do rather splendid renditions of Wu (吳 'ng') and Hu (滬 'wu') dishes, though Shanghai borscht is not one of them -- that's more of a Hong Kong thing really -- and neither are the nice greasy eels or the crabs and carp. Those require types of water beast not available on this side of the Pacific. But I highly recommend them. And their tung po pork (東坡肉 'tung po yiuk') is stellar.


There is nothing quite so heavenly as dumplings dipped in chili paste and vinegar.


It started raining after eleven a clock last night, which woke me up. A plate of dumplings would have been wonderful, but my apartment mate has rather overloaded the deepfreeze, so I can't buy frozen ones for future snacking until some of that stuff has been eaten.


We're not going to run out of food soon in this household.