CONNECTIONS IN A FOG

Strange intense dream involving Kaz and Mary, smoking Pease's Penny Farthing, and small freight aircraft -- both the Piper Navajo 31 and the Short 360 -- operating out of impermanent landing fields in remote islands. Balancing a need to stow containers firmly damn these idiots (tie them down; a shifting centre of gravity can spell disaster), with the sheer pleasure of an easy smoking Virginia ribbon, especially around tea time, cannot be beat.

An airport and a town that sound the same as a crow.

There are, if I remember correctly, three subspecies. In the Filippines one of them gave its name to a golfcourse, but almost all common names in the region derive onomatopoeically from the characteristic sounds that the bird makes.

There were brief bursts of activity followed by long bursts of nothing at all. The hours dragged by slowly, almost silently. A whiff of smoke on the breeze because further downhill they were using petrol to clear fields -- palm oil cannibalizes the world -- and small bitey things would wake you up at inconvenient times. Lots of weak tea. 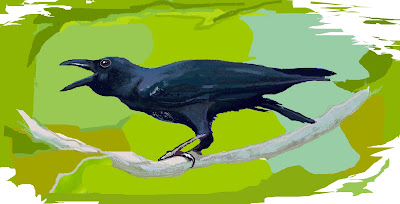 Crows are very likable birds. An old friend who spent some time in South American prisons for reasons that are complicated photographs the small colony of crows out near the ocean. Whenever I see those pictures on his Facebook page I hit 'love' underneath.
I really like crows. Their self-confidence appeals to me.

Grassy, figgy. Enjoyable and easy to smoke. Can be loaded up straight out of the tin, but benefits from a little drying. When puffed slowly it is complex; a faster smoke turns it into monochromatic heat, so younger men will probably not like it very much. Probably best to avoid this if you drive sports cars. The spice and smokiness from the Perique and fire-cured Kentucky respectively shift this from mild classic Virginia directly into the medium camp.

In the right hands this is a richly versatile and flexible mixture that pairs well with many things; tea, strong coffee, sherry, American whiskey. Sings in old Comoy pipes.

Cleaned up two collections over the weekend: one from a crusty old fart with bad habits and mediocre taste, the other from a gentleman who passed away sometime in the past year or two whom I wish I had known in life. His pipes were well-maintained, chosen with a good eye, and he smoked decent tobacco. I spoke with his wife last week. She seemed to have some lingering slight regret over his tobacco use (didn't ask why), but she had never interfered with what was a sporadic habit that gave him great pleasure.

They were probably a wonderful couple together.