THERE IS SOMEONE WATCHING YOU

From years of experience I believe that most members of the British Secret Service are left handed, sexually suspect, and have sustained severe neurological impairments because of bowling injuries. Nasty sport, that. Cricket. Not for sissies.
Either that or they have flashbacks to Malaya.
Years in the camps, you know.


Many British marketing departments were dense with operatives. Cricket players at school.
The American equivalents were filled with men from Midwestern universities; mathematically unskilled, football players, or jock-wannabees.

I have always felt that the marketing department people with whom I have had contact have always had personality disorders. Their behaviour and their sense of importance indicated that, and social contact with them proved interesting in a very boring way.
I have as much as possible avoided such types for a decade.
The past ten years have been far less dull. 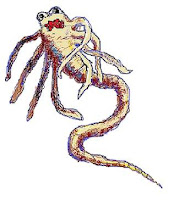 Years ago I knew more about cricket than now. It was exposure to cricket fans and cricket players. The knowledge was protective colouring, of course. Because cricket is a fundamentally boring game, much more so than baseball.
Quite utterly pointless.