THE GOOD BURRITO PLACE IS CLOSED ON SUNDAY

Yesterday could have been a burrito day. But my co-worker had planned badly, and his wife was bringing him his lunch. As it's always a crapshoot, I had purchased a tasty and delicious bland cottonwool and styrofoam sandwich from 7-Eleven, just in case. When you work out behind the empty parking lot at the end of the known world in East buggery Sasquatch (Marin County), and you don't have a car, precautions are wise.
There's not much out there.

I really do like having good food to eat.
Convenience store sandwiches?
Yeah, um.


Alas, there is no herring stand there, nor a frituur with frikandellen or bamischijven. Which I lament daily. Nor a chachanteng with wonton or jook or cheese covered porkchops and spaghetti or baked Portuguese Chicken over rice, and a hot cup of Hong King Milk Tea to go.

This man is all about taste. 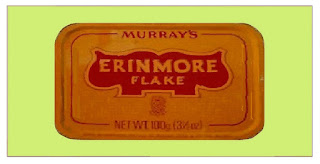 So the one redeeming light at the end of the tunnel yesterday was that my first smoke in the morning was a bowl of Erinmore Flake. Which is also how I ended the day long after nightfall. I do not habitually smoke this product, normally prefering cleaner Virginias without a Hello Kitty perfume, but sometimes I cater to my vicious side.


The last two habitual smokers of this that I knew are both dead. There is no causal link, their peculiar preferences had little to do with it.
They were both older than Jesus.

Underneath the fruity topping it's a decent medium bodied flake, perfectly suited to old men who garden or gibber about their card game or dodder and wobble.

Generations of crusty Irish hod carriers grew up on this; it was the tobacco they smoked as teenagers fresh out of their mothers' wombs, what they smuggled into the boys reformatory when they couldn't get Woodbines, and what they puffed contemplatively when their wives kicked them out of the house to roam the moors naked and alone.
There is a history there.

To say that my coworker loathes this product is to put it mildly.
He's actually a frightful damned purist.

Both my elder brothers smoked Woodies. They still do when Mummy's not around.

I smoke Mayfairs. Not my choice, but needs must.