IF YOU WRITE POETRY, YOU MUST SMOKE CIGARETTES

As some of my readers may have noticed, I tend at times to be a frightful asshole. Particularly in my political opinions and how I socialize with the rightwing hosebags among cigar smokers with whom I often come in contact. That's natural, you may think, because especially in California cigars are an expensive proposition, punitively taxed, and working class people cannot afford them. Which is not strictly true; some working class individuals budget themselves so that they can buy ten stogies at fifteen dollars a pop a week, and abstain from alcohol and drugs accordingly.
Then relish the mental health a cheroot gives them.

Some working class people stumble past my front door at one in the morning blind roaring drunk.

Typical Republicans who get smashed take an Uber back to Belmont.

Then recover on a patio in Marin the next day.

In the 'Qanon Corner'.


Several of them are regular visitors at the old Glue Works behind the parking lot in East Pickleweed where I work. I shall refrain from listing them by name, suffice to say that when the opressed peasantry finally awake and rise up, I shall happily lead the pitchforked Jacquerie to their palatial suburban ranch dwellings for the justifiable blood bath.


That said, I bear them no ill will. 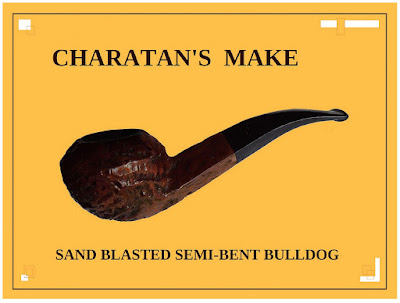 The Charatan above was a basket pipe at Sherlock's Haven, Marty Pulvers' store
on Sansome Street, nearly twenty years ago. Cheap. Reason being that a previous occupant had far too enthusiastically reamed it. For many years I used it to test
blends, gradually building a suitable carbon layer. The rim remains messed-up.
It still needs to be tamped at a diagonal, but it's now one of my favourite briars.


At times I enjoy a cigar also. But whereas smoking a pipe on the streets of my neighborhood says that this is a quiet man, possibly a wizard who can turn you into a toad, a cigar will prompt the passing street person to ask "you got a cigarette, dude?" or the random Vegan earthmom to call one names because you're poisoning her precious chihuahua. It was a Havana, quite nice. And if Foofy was having breathing problems, that was not noticeable. He seemed to be peeing.


Unreasonably, I still harbour a fantasy that I could be smoking my pipe outdoors, and some sweet young thing (which at my age means that's she's anywhere between post-graduate and late thirties) will happily exclaim something to the effect of "that tobacco smells so deep and mysterious! Are you perhaps an intellectual?" But I suspect it's more likely that, precisely like my benighted classmates in high-school, she would instead suggest I smoke something raspberry and vanilla froo-froo.

And pursuant that thought, I have it on good authority that when my mom first met my dad, who was a pipesmoker with a neat beard at the time, she sneeringly asked "are you a poet?!?" Berkeley was full of poetasters with pipes and facial hair in that age, and as a serious writer (published) and an English major (with three masters degrees in dead languages), she detested such pretentious gits.


Myself, I have no masters degrees. Though I do know lots about dead languages. And I write poetry, but it's entirely in Dutch, which I don't often mention, nor have I ever shown it to anybody. Dutch and Flemish are splendid languages for both sonnets and heroic verse, by the way.

"Hey man, you got a cigarette?"

Alas, there are no sweet young things in this neighborhood. This morning, while out smoking my pipe, I dodged an old codger drooling to himself, an entitled earthmom walking her dog, and a street person.
Who looked and smelled like a poet.

It is of course axiomatic that what I like may not appeal to you. And, if you are NOT a pipe smoker, it may offend you. If you are a pipe sm...