Thomas in Marin, who had been interned at Stanley Fort (赤柱炮台 'chek chyu baau toi') during the war, was one of the last smokers of Erinmore Flake whom I knew. Old Skeleton (老骷髏 'lou fu lau') in Hong Kong was one of the first people I remember stating, categorically, that he liked Erinmore Flake. That was at a time when I myself had not re-explored the product, and could very well remember that it made me sick twice, in my teenage years.

[Stanley Fort: at various times home to the Royal Regiment of Wales, The Queen's Royal Surrey Regiment, the Black Watch (Royal Highland Regiment), the Royal Navy, the Royal Hong Kong Regiment, the 27th. Heavy Regiment, various Gurkha battalions, and a whole slew of Scottish and Indian units. Stanley is located at the southern tip of the island.]

So the pipe below would have appealled to him, and I remember him smoking similar briars. 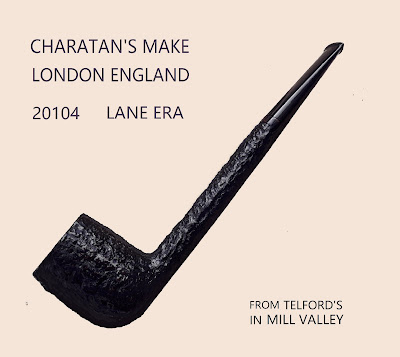 The proprietor of Telford's gave this pipe to me recently, and through a twisted chain of association naturally I remembered both of the gentlemen mentioned, but I shall not smoke Erinmore Flake in it. Not because it would be heresy, but because I have no wish to open another tin of Erinmore from my stash of pre-Orlik product. Yet.

Old Skeleton used to say that you couldn't get a decent cup of tea in Hong Kong. "These people invented tea, but hardly know how to make it. Same as the French who invented chips (French Fries) and won't do a decent bag of 'em if their lives depend on it, and the Scots, who can't make a decent haggis, which stands to reason because the blasted thing is inedible."


I might agree on the haggis. Possibly also the fries, because the Dutch and the Belgians cook better than the French, especially when it comes to deep fat. But I had an excellent cup of milk tea in Chinatown today, at a sparsely populated place, and enjoyed my smoke afterwards.

No, not Erinmore. Something more Scottish, by Greg Pease.
Twilight was gorgeous. That reflected golden light.
You could see downtown buildings glowing.


I have several sandblasts, and a year's worth of the old Murray's products.
Both Thomas and Old Skeleton are sadly no longer with us.
Old Skeleton passed a decade after the handover.
Thomas three years ago.

老骷髏 (Old Skeleton), not to be confused with 骷髏魔 (Bony Demon) from the HKP College). A lot of kwailo looked, quite frankly, angular and demonic. Especially if they smiled.