DISTANTLY THE SOUND OF BAGPIPES

We met each other in front of the old theatre and got into a long conversation. An intelligent woman who asked questions, and said sweetly that she thought I was lying when I told her about the Romanian I once dated who came to this country with only two things in mind: medical school and driving the length of the U.S.- Canadian border. Which I was.
It was very perspicacious of her. She didn't seem to mind.

It was an odd but pleasant dream. Sunlight. North Beach. Washington Square. The probability of something to eat. Possibly in company. For some reason an old friend was in there too. What threw it into left field was that I could hear the Hong Kong Police Band.

[The Hong Kong Police Band (香港警察樂隊 'heung gong ging chaat ngok teui'), with bagpipes, and their excellent rendition of We're no awa tae bide awa, which has quite unpronounceable lyrics (!), but as a British quick march is brisk and stirring.]

Several of the movie theatres that once existed in San Francisco are no longer around, having been converted entirely or torn down. There used to be two on Polk Street, three with multiple screens on Van Ness, and four, sometimes five, then three in Chinatown.


The only time I ever took a date to the movies was when I was still in Berkeley. The movie was Woody Allen's Bananas. It was the wrong choice, she didn't "understand" it, and that relationship didn't go anywhere.

If you think about it, that's a good indicator. Take her to see a Woody Allen movie, and note her reaction. If she enjoys it, there are possibilities, and she can hold her own in a conversation. Same probably goes for Monty Python. 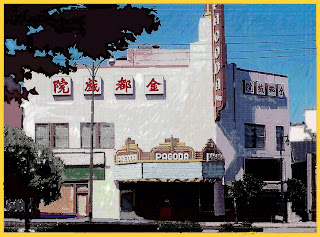 Of course the other thing is that there are fewer things to do on dates nowadays.
There's always food and caffeinated beverages.

Sadly, I lack an imagination in that regard. I cannot imagine what a woman would like to do. And so few people read books that that too is not much of a possibility.

Dating requires being comfortable with each other and having things to talk about.

By the way: Mister Vampire (殭屍先生 'geung si sin saang') is probably not a good date movie. I'm just guessing here. But it would be interesting to try.