A SILHOUETTE AT THE EDGE OF MY MIND'S EYE

One of the images that many Dutchmen have in their subconscious is of an Indonesian woman husking padi, which starts with pounding the grains, after which a winnowing basket is used to get rid of the chaff. A big stone mortar, and a large long pestle-like pounder. A common sight in the former colonies, an image for any number of things but famously a brand of Indonesian spice preparations and condiments sold all over the Netherlands. In actuality, you will never observe the process in the country. Rice is not grown there.

That image might remind one of the character zhou (周) in seal script. 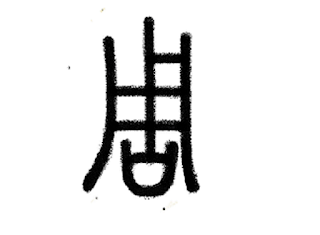 There is little relationship between such an interpretation of that character and what it means; circuit, round, cyclical, or to aid or assist financially.

It's also a surname and the name of a dynasty.

The Zhou did have, unsurprisingly, an aggrarian connection or connotation in their history. And, if you think about it, the heavy stone mortar for pounding grains to loosen their husks is a pretty solid marker of setlement and a fixed abode, as well as a home or family.

Which is somewhat beside the point; I have not been exposed to millet.