Note of reality: unvaccinated people are more than ten times as likely to catch Covid and die from it than vaxxed people. They are also that much more likely to be Republicans, Trump supporters, and Christians.

Of course, to folks in that crowd it's all a big plot by 'gubmint' and the liberals to take away their liberties, track them, or finally build the FEMA concentration camps that they have talked about since the first year of Obama. The end times, the antichrist, and child labour camps on Mars.

The map below, taken from a BBC article shows vaccine levels in some parts of the country, which might indicate where losses will be greatest. 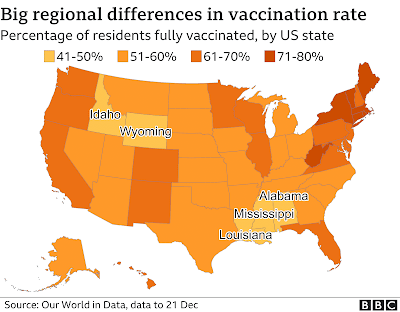 SOURCE ARTICLE: Who is not vaccinated in the US and what's the risk?


Well okay. For the next year and longer, life in Alabama, Idaho, Louisiana, Mississippi, and Wyoming, might be nasty, brutish, and short.

For over twenty months we've had to deal with this pandemic. Hard data is available, we know more about it than before, sources for solid information can be easily found, and healthcare professionals and scientists have overwhelmingly been clear, precise, and informative.

But some people still choose to put their trust in hydroxychloroquine and ivermectin, as well as the unhinged blatherings of pastors and rightwing pundits.

How jolly good for them.

Last month I attended a memorial event for an old friend who died over a year ago from factors other than Covid. The other attendees were largely cigar smokers -- his ashes were in a cigar box, fittingly -- and while at the bar afterwards it became apparent, sadly, that a few of them were still Covid sceptics and full of rightwing horsepucky.

I shall be avoiding that bar, their hang-out, for the foreseeable future.
As I avoid all gathering places where such people go.
It's just too "Wyoming" for me.