It happened a number of times yesterday, and it's not unusual anymore. Disturbing, even irritating, but frightfully common. Somebody offered me a seat on the bus. They see a gammele oude kakker, but when I look in the mirror, what stares back at me is a trim middle-aged dude, who is remarkably young and feisty looking. The acme of spry and wiry.
I'm guessing that "fit" and "fat" are equivalents.
As far as millenials are concerned.
It's a matter of perception.

I am not Gandalf.


On a crowded bus, sitting down puts you on eye-level with someone else's crotch. Unless you invited them into your home for that express purpose, that may not be the best vista you'll see that day.

Usually on the bus I am quite capable of standing, full of beans, piss and vinegar, and hot tea, as I am returning from Chinatown where I had a snack and warm beverage. And I smoked a pipe filled with a tobacco that would probably trigger y'all. I am not a fragile old git, despite being a little silver around the edges, and not looking like a wrestler or quarterback.
I haven't even hit retirement age yet!

Besides, women should sit. That's what is proper. This damned bus shouldn't move until every sheila is sitting down.

Sorry ladies, I'll hold my groceries in front of my crotch.

Milk tea and a pastry, then Hang Ah alley or Spofford for a smoke. It's time for quietness and enjoying the moment, observing little children walking with their elderly relatives homeward after school, women buying vegetables, old gentlemen popping out of the residential buildings for a quick cigarette, or folks who were at the same bakery just minutes ago smiling in recognition. Perhaps a few words. "Nei fan ok kei ge mah?" "Hai ah, hui sik faan, nei ne?" "Mei, gap yin sin...." Because of course it is still too early to sik faan.
There is so much day light left in the day.
It's still tea time!

[Fan ok kei: returning home. Sik faan: to have a meal. At that time of day, one's supper. Nei ne: and what about you? Mei: not yet. Gap yin sin: having a smoke first.] 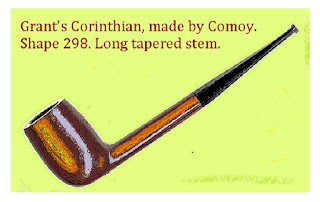 Note: this shape has an oval shank.

The briar I brought with me for my tea-time jaunt was a shape that doesn't appeal to me much; far too young a shape! Probably more suited to some young sprout in his early twenties! But it's aged nicely, and the briar has an ancient glow to it. It's perfect for Latakia blends, but does very well with matured Virginias, if smoked slow, and away from the wind.
The weather is right for nice dark flue-cured leaf.
Autumnal, but not frigid yet.

Recent smokes: Russ Ollette's 'Black House', and Dunhill's 'Dark Flake'. The first is a full Latakia mixture that smells rich and lively in the tin, the second is an ethereal aged flake extremely similar to Petersen & Sorensen's 'Tradition'.

[Black House: fifty percent or more Latakia, something black Virginia-like to carry the excess creosote, Turkish, plus what I presume to be Red Virginia, and allegedly a smidge of Perique. It is very nice, and you'll need to air your living quarters out for two or three hours before the other occupant returns in the evening, which I did, because she is a delightful roommate, pays her share without squabbling, and puts up with me, my eccentricities, and my stuffed creatures. Although not my smoking.
She has a poor sense of smell, boruch Hashem.
Dunhill Dark Flake: this bears NO resemblance to the original dark flake, OR the regular flake. What probably happened is that Kohlhase & Kopp said "hey guys, we got the license for this, let's produce something and see if it sells". Orlik didn't have a recipe for the old stuff, so they recycled one of the recipes they did have for something else, and voilà. The result is a superlative incense-like indulgence for when you won't be distracted, and you can even get away smoking it in the teevee room late at night when she is asleep in her room. It will not wake her. Whereas Russ Oullette's fine mixture would have her beetling up and out furiously, and accusing you of being a depraved Dutchman (which I am, please stop shouting), and demanding that you go smoke it with the drunks down at the bus shelter. Which I don't like to do. I respect their dislike of the finer things.]


Both are delightful. Russ Oullette's mixture has been described as "reminiscent of camel dung; the spousal element objected rather fiercely", whereas the flake is "pleasant to tolerable".