Took a long walk with a pipe last night around the lower reaches of Nob Hill. There was no fog, scarcely any clouds. And it wasn't cold. Summer is warming up here. To which I am not looking forward at all, as because of my blood pressure meds it has become harder to deal with extremes of hot and cold. My comfort zone has narrowed.

Obviously, when I've got a pipe in my mouth, my mask is keeping my chin warm. Just in case.
I've had both shots, but I don't know about strangers, and I would rather not be part of any chain of transmission. That always finishes with a dead person at the other end. And wearing a mask makes other people feel safer and more comfortable. Among other things, it says that one is a responsible member of society, willing to play by the rules.

Those who refuse to wear a mask, in what OTHER ways are they dangerous and unreliable? Are they emotionally unstable and likely to become violent? Are they rapists, brigands, or drug-addicted shoplifters? Are they insurrectionists waiting for another January 6?
Like wearing clothing, a mask suggests stability and self-control.
Not wearing clothes in public suggests psychosis.
Selfishness and egocentrism.
Insanity.


We are clearly not all in this together. But some of us wish to conduct ourselves as if we are.


With that in mind, a chachanteng serving Hong Kong eaties with which Caucasian tourists are quite unfamiliar, and will therefore avoid entering, is probably the safest place to hide out from visiting hordes from the savage interior during summer in San Francisco. Yes it's clean. Yes there is food. Yes there are beverages and background music, as well as presumably a bathroom. And there are NO bloodstains anywhere! But the food is unfamiliar.
And the restaurant is therefore utterly suspect, as well as terrifying.
Clearly they don't have Kung Pao, like in Kansas City.
And no General Tso's either!

They have baked chicken cutlet rice. With tomato sauce and cheese. 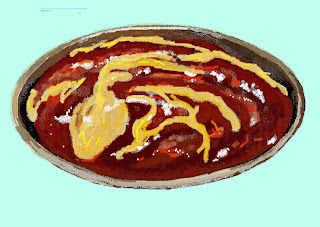 焗雞扒飯
Which was very good. As was the hot cup of Hong Kong Milk Tea. From my vantage point along the wall I could observe not only everyone else in the room, but also count the people without masks walking past on Stockton Street. Of which eight were Chinese, and one hundred and thirty six were Caucasians. Maskless white people outnumbered the masked individuals enormously. The ones wearing masks were probably San Francisco residents, the others may have been from Arkansas or Mississippi, or other places where people are extremely stupid. Plus rabid freedom-loving individualists who voted for Trump and have complete religious faith in crazy conspiracy theories.


That's perhaps somewhat harsh and judgmental. But as an American, I have the g-d given right to be suspicious and savagely disapproving of other people, AND it's part of my white person cultural heritage as well as my ancestral form of Christianity (Calvinism). Never mind that no one in the immediate family has actually been observant or religious in generations.

The freedom to be harsh and judgmental allows me to despise most of the white people here. My ancestors came over to get away from that lot. Those other folks were stupid and inbred then, as well as into witchcraft and abominable heresies, and they still are.

I fervently wish that all these tourists would visit Alabama instead.
Alabama is very beautiful, and has wonderful people!
Southern hospitality! And familiar food!
Oh it wil be delightful!


It does NOT take all kinds; there are many I could very well do without.