THE TERRORS OF SAN FRANCISCO

Probably the most famous pipe-smoker is Sherlock Holmes, an entirely fictional character with many precious eccentricities and affectations. You will understand that I rather despise him, and can't stomach the entire genre of brilliant oddball detectives. Uppercrustian English problem solvers with entitlement issues just aren't my cup of tea.

My three pipe problem last night was perfectly mundane. And consequently, rather than the black briar, cherrywood, and clay in quick succession a la Holmes, it was three different corncobs over a several hour period. More like Samuel Langhorne Clemens. Filled, not with black shag or whatever dreck the fictional detective smoked, but a solid old-fashioned Burley blend with Virginia, firecured Kentucky, and Louisiana Perique. Very American, the kind of well-composed earthy compound such as was more common back in the day when everybody smoked a pipe (before WWII) and skilled tobacconists put together smoking mixtures that soothed the man within admirably.
Burley was common then.
It was cheap.

Coffee, corncob pipe, and unplanned and unwanted major aches in both feet, the one on the right primarily. Probably caused in part by circulatory issues AND nerve damage.
So not a problem for which there is a quickfix. 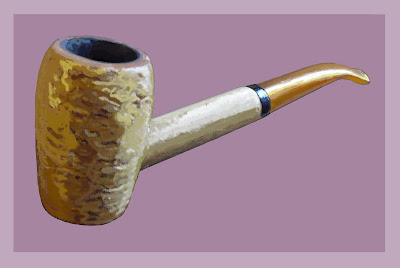 Saturday night in San Francisco is NOT the perfect time for a country bumpkin to be stumbling around lower Nob Hill muttering to himself about all the entitled yutzes without masks getting drunk down on Polk Street. Modern society does not look very kindly on an old-school grumpus with a pipe. There is no welcoming late night diner with fresh coffee where one can sit reading the latest issue of the "Calvinist Disapprover" while puffing away.
One gets chivied if one lights up inside.


Modern society is comprised of Karens saying "you can't do that here" and their spoiled kids.


['The Calvinist Disapprover' is as yet an entirely fictitious periodical. But one for which there is a crying need, and a clamoring demographic. I would enjoy reading it very much, and I should be on the editorial board; I have ideas.]


In between smokes and being stared at by twenty-somethings unused to tobacco smokers and people a generation older, I read about carbuncles and Germanic languages. A carbuncle is a cluster of purulent bacterial lesions, which is quite unrelated to any of the Germanic languages, despite what you might think if you were going by the sound of several of them as spoken by native speakers. Which can be painful to the ear. An audible disease.
In this day and age carbuncles are mercifully rare.
Drainage and antibiotics are required.
Mark Twain had a carbuncle.

Carbuncles are far more frightening in Dutch; apparently they can occur close enough to the path of blood circulating in the brain that serious (fatal) infection there can ensue. Consult your physician. The German articles mention that prädilektionsstellen (predelective sites) sind in der regel (in the main are) nacken, schultern, hüften, und oberschenkel (neck, shoulders, hips and the overshanks). It sounds more clinical and exciting in German.

Some of my favourite Dutch and German authors were also thus afflicted.
They were alive in the years before penicillin.
And not very clean people.

There's no mention anywhere of Sherlock Holmes bathing.
Filthy, and as a drug user quite susceptible.
Either that, or ulcerations.
Just so you know.