He seems like an unlikeable sort of fellow, until you notice that underneath his gruff nastiness there is a gruff niceness. I suspect that he's actually rather vulnerable. It's a weird Red Cudgel behavioural tendency of some Cantonese men. It's not from seeing too many HK gangster movies, it comes naturally. And it allows someone else to be the White Fan.

In many ways the traditional roles familiar from HK gangster films reflect customary social patterns much more than anything derived from the secret societies. In a way all crime movies are speculative; the codes of conduct come from civil society, and though far more extreme (and more perfect) on screen, the patterns are inherent.

Older brothers must be stern, and maintain distance.

Which, of course, the average Cantonese speaker is prepared to ignore, as they will in all gregariousness respect him for it while paying mostly lip-service to the idea of seniority.

The head of the kitchen in a bakery or restaurant should naturally fall into that pattern.
It's somewhat expected.


All amateurish sociology and anthropology aside, the stuff issuing from that kitchen is exceptional. The little chicken pies are absolutely delicious. 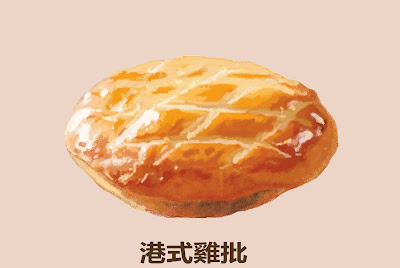 My apartment mate complains that many HK chicken pies are too sweet -- they do tend to use a crumblesome sweet dough -- but she lacks that typical HK taste (not surprising, as she's not from there), and has not swallowed the HK atmosphere and attitudes. Her social environment includes few individuals from Hong Kong, her version of Chinese is not the same, and her "Chineseness" is from relatives long settled in America OR kin who never left Toisan.
Which leaves me as the expert sinologist among the two of us.
And, erm, I'm rather white.

At times dreadfully so.

Which allows me to listen in on conversations in many places, like a delightful bakery where I've been many times before, in which I sought refuge from the cold wind blowing outside. It being colder than average summer weather in San Francisco. The medications I'm on have lessened my ability to deal with extremes of temperature. It's colder now than it often used to be, and when it's too hot it's too much hotter. I blame channel blockers along with not enough subdermal fat. Brother, it's freezing out there.

I find their chicken pies (雞批 'gai pai'), flaky barbecue rolls (叉燒酥 'chaa siu sou'), and egg tarts (蛋撻 'daan taat') quite delicious. As well as in season their mooncakes (月餅 'yuet bing'). These are things to which I look forward when stumbling half bent from the gale up the street, an inspiration to continue my perilous journey in the arctic wasteland that this city is (except when it's too hot). The prospect of a pastry and a cup of Hong Kong milk tea (港式奶茶 'gong sik naai chaa') is powerfully inspiring.

Enjoying such things fuels one for a further venture into the howling fjord out there, lighting up one's pipe and nearly peeing onself from the cold, for a half hour slog while enjoying a smoke.

It takes six tourists from Nebraska or wherever to inspect every pastry in a well-stocked case, and ask questions, before deciding that one of them needs a carbonated beverage and the rest of them are fine, thank you, won't purchase a blessed thing. A Chinese bakery is probably the most unusual adventure they've ever been on. But it doesn't quite beat the Hard Rock Cafe.

Over two dozen non-Chinese came during the forty minutes I was there.
And collectively spent maybe ten dollars.


On the plus side, there are far fewer dangerously insane people about.
It's not a traditional social behaviour in Chinatown.
Unlike the rest of the city.