At a Chinese university a blackbird has been terrorizing male passers-by for several years. Not women, just men. It will fly down and chase away the offending party. So the university has put up a sign advising people to walk elsewhere.


"There is an evil bird in the tree. Please do not provoke it, and consider taking another route."

A video shows men fleeing from the little rascal, while women stroll through its area without any concern. The bird only attacks men because it is a sexist pig. Which, in a creature that is only hand-sized, and not even a mammal, is both perversely charming and exceedingly strange.


For a long time now there have been two sections of California Street that have a similar evil black entity. One of them is outside 101, in the second block before Market Street, the other is on top of Nob Hill. Please do not disturb the birds any further, they are angry enough already. The hapless victims are mostly men, arrogantly seeking to traverse the birds' territories.


This blogger has never been bullied by a bird. Other than the stuffed turkey vulture currently perched on my apartment mate's bed, who demands food (because he is very interested in eating; it's a consuming passion of his). Yesterday I gave him some of my porkchop, and half an hour later he wailed "no one ever feeds me", whereupon I decided it was probably time for icecream, and shared it with him. He has a horrible memory.

He's not territorial; we are all his bitch.


I shan't provide him food until this evening today, because I'll be heading into Chinatown in a little while to have some congee and an oil stick at Yummy Fastfood. Haven't had congee since the pandemic began, and I'm very much looking forward to this. Things have started opening up for indoor dining again, and while I've been cautious -- avoiding very busy places -- I have indulged a bit. Any eatery which has tourists is of course out of the question, because if they are from the rest of the country they are unwittingly stupid, and probably diseased.

The Europeans are similar, as are Brazilians. That's not bigotry, but just an observed fact.

We all need an angry bird to chase them away. 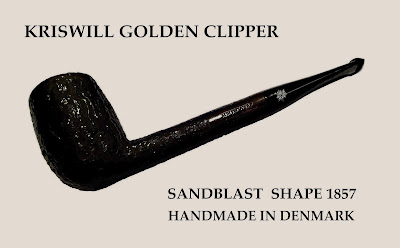 In homage to that aggressive avian, I shall be smoking the briar pictured above after lunch.
A black sandblast Liverpool-shape from Kriswill, which was a Danish company that closed its doors back in the mid-seventies, after barely two decades of making some very nice pipes.

Pipe tobacco, as is well known, offends the refined sensibilities of many people nowadays, which will probably serve to keep them at a safe distance. It doesn't even matter whether it's decent leaf, horrid candy-perfume aromatic Cavendish such as perverts and illiterates smoke, or even a well-composed Red Virginia and Perique broken flake with a delicate old fashioned fragrance naturally present in the product that brings back old times and might please elderly fossils still lamenting the disappearance of McClelland Tobacco of Kansas City, such as for instance Red Carpet by Cornell & Diehl, it has that effect.

I've always like such fine tobaccos.
Now more than ever.


Do not provoke, and please consider taking another route.