NOT MY GRANDMOTHER'S SAMBAL UDANG

Ideally all the foods I like could be found within a few blocks. And I would be fat as a house.
But while good Cantonese food is not far off, Dutch Indonesian Malay Hokkien and Nonya are virtually impossible to find, and that has always been the case. My first two years back in the States after being in the Netherlands for most of my childhood were years of deprivation, because my grandmother cooked "English" foods. Good, yes, but, well, um.....
And I didn't know what any of the ingredients were called in English.
Which meant that I only gradually found them.
Mostly in Chinese stores.

There are reasons why I live close to Chinatown.
In the most Chinese city in the United States.

One of my favourite grocery stores caters to Chinese from Malaysia, Indonesia, and Vietnam. Which does mean that half of the snacky things are, unfortunately, flavoured with durian, but the condiment and ready made cooking sauce aisles are an unending source of pleasure.
Plus they have a vast selection of noodles.
And they're nice people.

Less than two blocks away from the hospital, half a block from a dynamite bakery, roast duck, fresh tofu, across the street from dried fish ..... if you want to casually blow a few thousand on fancy jewelry you can do that too, and there's hot Hong Kong milk tea at nearby places.
Naturally I go there at least once a week.

No, I'm not overweight.
Kind of scrawny.


Lunch was duck chunks in garlicky black bean sauce, with some stringbeans, and noodles. And sambal udang on the side. The key to a good sambal udang is the correct balance between tanginess and oil, so that it keeps well in the refrigerator for a day or two. The tanginess is provided by both tamarind and lime juice. But it should be a wet dish, Malay style, to colour the noodles or the rice.
Many cooks add finely slivered kaffir lime leaf, which cannot be found fresh here, so I omit it.
I also up the ante as far as chili paste is concerned, because as a Dutchman I lack subtlety.

Sumatran grandmothers do this with stinkbeans (peteh) added. They're probably even less subtle than I am. 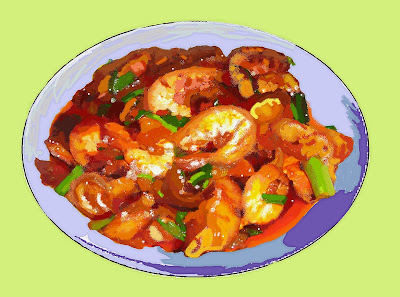 Heat some oil in the pan, add the minced shallots and cook till coloured, then add the garlic, sambal ulek, and ground coriander. Stir, fry till fragrant, dump in the shrimp. When the shrimp are turning, pour in the tamarind water to boil up, squeeze the lime into the pan, and stir in the sugar. Decant into a shallow bowl, and strew chopped chives on top.

Or, for a touch of subtlety, garnish with cilantro.