My friend the whisky loving Parsee lady in South City objected to a recent illustration (steamed pork patty with dried fish and ginger slivers), which she sneered was in the same vein as the painting of bitter melon and fish bits with black bean sauce. She has strong opinions. They're not necessarily correct opinions, but strong. In order to please her picky palate, I offered to do an illustration of Bombay Duck. Which, as everyone knows, is possibly the most popular fish, whether fresh or dried, in the world.

Many Chinese people love carp and yellow croaker, Filipinos are inordinately fond of bangus (milkfish), the French like trout and sole, the Dutch go for herring and eel, Anglo Americans only trust tuna in a can or McFillet-o-Fish, and a billion Indians plus the English for inexplicable reasons snarf tonnes of Bombay Duck, also known as 'boomla', 'slimey lizard fish', 'bombil', and by its scientific name: harpadon nehereus.

It is a remarkably loathsome creature. She was okay with me doing a picture, "only if you post a picture of the actual Bombay Duck without explanation".

I note that she's seen fit to comment negatively about yet another food painting. Maybe she has dyspepsia? It's not that she's close-minded about food -- she eats Hunanese stuff, for craps sake -- but either gout or acid indigestion would explain an awful lot.

The English, whose cuisine betrays a sense of humour if nothing else, prefer it dried and fried, which makes it resemble either crisped rancid bacon OR the piscine equivalent of durian.
It's probably great with beer.
Lukewarm beer.


This is what revolted her last night: 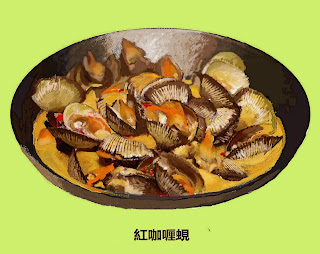 Maybe the supply of Scotch dried up. Or having lived in California so long she's developed psychosomatic allergies, like a neurotic white woman. I'll have to ask her about garlic, ghee, and gulab jamuns, and if she verbally pulls up her nose I'll know she's flipped.