The most important words in any television series are "I didn't kill him, you've got to believe me". And it doesn't matter who utters them, man, woman, or random stranger of either gender. The phrase serves to put the focus on one person. With that in mind, if I'm ever called upon to make a speech at a political event, or as a guest-expert on a television show about religious affairs, those might very well be words coming out of my mouth.

Hey, look at me! I didn't kill him, you've got to believe me. And that's not my gun, it wasn't in the glove compartment. He was already dead when I found him! A free-range stiff.

I mention this because the apartment mate has been watching crime shows with dead people all morning, and every time I stepped out for a breath of fresh air (to smoke), the stuffed turkey vulture who lives here too has demanded that I bring back a fresh corpse, or, if that proves too heavy for an old git (by which he means me) that I should take care to harvest the fatty thighs.

If I cannot find a nice juicy corpse, he says, I should just make one.

I remonstrated that there are no suitable candidates.

If there were, I could oblige. 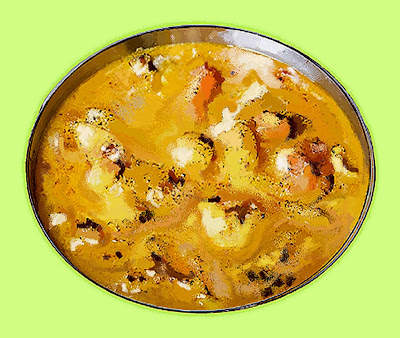 My ideas of a suitable meal for Independence Day do NOT involve the freshly deceased fellow citizen. Instead, later this afternoon, I shall head into Chinatown in search of Portuguese Chicken Rice. Because nothing says all-American festive eaties like a mixed curry cooked by immigrants in a style they've sort of imagined from a place where they haven't lived (Macao) consumed by a Dutch speaker (me) with liberal sploodges of a hot sauce (Sriracha) invented by a Viet-Chinese refugee, named after a town he had never visited. Mega melting pot.

Chicken chunks in a mild coconut curry sauce (flavoured with ground coriander seed, turmeric, mustard seed, cumin, fenugreek, star anise, cloves, cayenne; OR a quantity of a decent curry powder instead) with potato chunks, and perhaps a slice or two of chouriço or lingüiça for extra flavour, ladled over egg and scallion fried rice, cheese sprinkled over, browned under the broiler. As food goes, it's the perfect metaphor for the country we live in.


The cheese is already in there, the only thing that would make it truly 100% American is two rashers of bacon laid over it, and some pickled jalapeños (chiles en escabeche) for colour.

And perhaps some ketchup.

I didn't kill him, your honour, he died of over-eating.
He's been cold and stiff for several hours.
That, too, is all-American.