First cup of Java was at around six this morning, accompanied by internet cruising (news, FB, and Wikipedia), followed at seven thirty by a jaunt out of the house for the first pipe of the day. There is no wind at that hour, though it is still cool, even cold. Sunglasses uncle passed me at the intersection of Kackson and Larkin, I bade him good morning to no response, as usual. He's probably deaf. Auntie with the pistachio hat noticed me across the street, we waved.
I think that she's wearing a new lid, because it looks more minty than it did a while back, and lumps slightly differently at the crown. She must like that colour range. And have a source.

I myself do not wear a hat. If I did, I'd end up having hat hair and looking pointy-headed. Which isn't a good look. I've never been envious of people who wear baseball hats. They usually look like goobers, or men trying to hide thinning hair. The first is direct observation (goobers), the second a noticeable pattern (coots). It is a stupid look.
Yes, I'm judgemental. 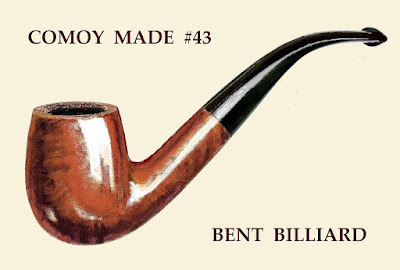 Red Virginia and Perique flake. The tang of burning autumn leaves and fruits. No, not a tire fire. Second cup of coffee upon returning home. The apartment mate has left for the day, it is silent in the apartment. Does everyone close the bathroom door when they're the only one present and need to pee, or is that just my own neurotic bent?

What if the stuffed creatures are roaming the apartment?

Some of them have refined sensibilities. Which is why I'm surprised that none of them have borrowed any of my better briars. They'd look quite dignified with a jaunty Comoy Blue Riband between their teeth. Clenched Clark Gable-like while reading in between shoots. 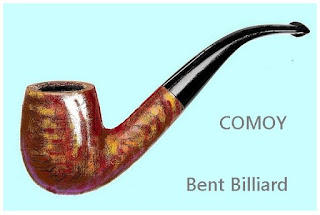 I enjoyed it several times on Waverly Place down in Chinatown, rainy Autumn days. It turned cold quite early that year, and became blustery in November. Quiet strolls on the scuttle-leafed street, with odd refracted brightnesses from the wet weather. No tourists exclaiming over pink elephants, odd artifacts, or ancient sea captains smoking pipes.

I am still baffled about the FB algorithms presenting "killer haemorrhoids" as the very first thing, top of my feed, this morning. It sounds nightmarish, like a horror movie monster. "Once in each decade, the Killer Haemorrhoids awaken from their slumber, and roam the night time streets looking for innocent victims to afflict." "Our heroine flees in terror, pursued relentlessly by Killer Haemorrhoids, screaming". Not exactly a perfect date movie, but interesting. It would make a good tale several years later. "We first held hands while watching Return of the Killer Haemorrhoids; it was SO romantic!"

I should point out that killer haemorrhoids occur in the Bible.

Lots of good stuff there.

Heading down to Chinatown before lunch today, probably shortly after noon. Need to purchase more Meiji chocolate, as well as some veggies. And maybe have a snack somewhere.