Sad to say I didn't find the loquats which I mentioned I would search for in a previous essay. But of course I didn't really look. It was too cold and windy on Stockton Street, and there were too many stupid white people without masks there. If nothing else, this pandemic has shown that you have to watch out for Anglos, they are dangerous and stupid.
Unlike proper Dutch Americans.

[We Dutch Americans are a different kind of dangerous and stupid.]

It's not like the Anglos wiped out whole populations deliberately with infected blankets, that was just icing on the cake of being unwashed and diseased idiots. We Dutch did all of our exterminating by hand, because we're bloody perfectionists.


But enough criticism of my fellow white people.
They can't help themselves, some of them.
It's how they were raised.


I did find some green mangoes, however. Came home with fruit, chilies, biskut sandwic dengan krim berperisa lemon, and some fresh brassica with a jade-green hue. So tea-time today was a rolling snack-a-thon. I can still taste the salt, grease, and capsaicin on my lips. Yes, this does mean I shan't be kissing anyone the rest of the day -- capsaicin travels, and the opposite gender has sensitive cheeks -- but that wasn't in the cards anyway.
I am a middle-aged man, stubborn and angular.
And I smell of smoke. 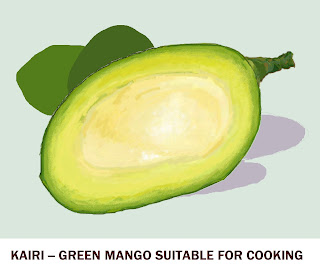 Green mangoes are excellent eaten as is, or dipped into something salty, like, for instance, wet shrimp paste mixed with a few drops of olive oil. That probably isn't very healthy, and I shan't mention it to my regular care physician, who would probably say that I need to cut down on the salt before asking which brand of shrimp paste, and suggesting a touch of sambal too.
Because, as he and I both know well, sambal belongs on everything.

Dutch and German food benefit immensely from sambal.
English food too, but not nearly enough.
It almost can't be redeemed.
It's too Anglo.

After snacking on the salty mango slices, I fixed myself some fried rice noodles with smoked sausage, shrimp paste, garlic-ginger-scallion, and the green vegetable with the jade-like hue (which is a reasonable substitute for savoy, but prettier and more delicate).
Perfection was attained by added sambal to the pan. 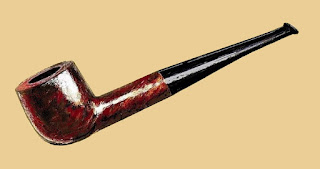 Smoked this after shopping in Chinatown. Hadn't filled it in a while
as I couldn't remember which document box I had put it in last year.
By early evening, my apartment mate had come home. She's Asian American, so not a health hazard or dietarily neurotic, and she didn't ask what that kitchen smell was. My cooking succesfully hid the fact that I had been smoking inside for most of the day.
She's Chinese, and neurotically fastidious about that.
As many of them tend to be.

Stay away from the Anglos, dear, you don't know where they've been.