Four years ago Adrian was still in Hong Kong, after having spent several years posted to an even warmer place with much less rain. Hong Kong was a halfway point between there and England, where he's been since retiring. And Adrian liked to smoke Dunhill's Elizabethan Mixture while there. We know this because there was photographic evidence.

The picture below is of an area not far from where he smoked then. But it might as well have been a world away, across the harbour, where Cantonese is more common than in Central. 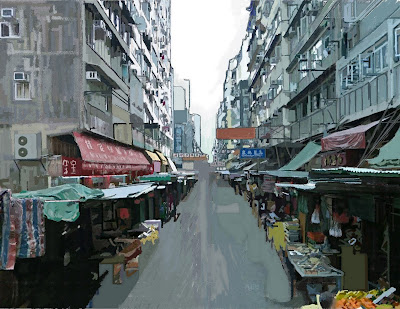 No, it's NOT San Francisco.

Strong milk tea, a toasted buttered piggy bun (called that because it looks like a little piggy), and a place to shelter from the rain that blows in late morning or early afternoon. An umbrella is not really necessary, although the pipe smoker is advised to carry one just in case.
Smoking under a shopkeepers awning may not be the way to go.

[As with any painting on the computer, if you cram in enough blobs, stay away from the stronger hues, and then reduce like topsy, something close to photo realism is achieved. The great advantage of Paint on the computer is that mistakes are not permanent. Given that my right hand occasionally spasms and right-clicks, which erases what I just drew, and that I still haven't fully got complete obsessive control of my hand back since that episode several years ago, this is good.]


Lunch today was a little chicken pie I got in Chinatown yesterday. Bought four, my apartment mate took two of them for her lunch at the office, there's one left, which she can have too.
Can't find piggy buns in C'town. They may not know what those are.
It's mostly mainland Cantos and Toishanese.

I'm smoking Elizabethan Mixture right now. It's not produced under the Dunhill label -- wasn't made by them for two decades anyway, but by Orlik under contract -- so this is actually the STG version marked as a Peterson product. Same factory, though. Peterson as a brand for pipe tobacco was bought by STG, and it's same recipe.


There are five products that help maintain a semblance of civilized living: tea, pipe tobacco, marmalade, hot sauce, and medicated foot powder. That last is not meant for the mouth. In hot weather and humid climes foot powder is essential, preventing itch, discomfort, and odour. You'll grow to like it, and might even become addicted. Powdered feet are happy feet.
Judiciously applied it also keeps the wooden floor from creaking.
Can also be used as talcum in a pinch.

Get enough sleep and start the day with coffee; this makes you bearable.
Always shave and put on a clean shirt before going in to work.
Maintain a healthy relationship with a book shop.
Bathe regularly.

This is the way.