Nothing could be more Chinatown than a loud environment with lots of people scarfing down small eaties. For which, naturally, the cheap bakery is optimum. Of which there used to be many more than there are now, because C'town is changing, and the prosperous types are moving out, leaving only the poor, the old-fashioned, recent immigrants, and the elderly, who don't want to leave the familiar places. Plus, of course, the service industries that cater specifically to a Cantonese clientele.

But still there are good places.
On can yet pass time well.
And one can eat.

Eating on the run is as much part of the ambiance as leisurely dimsumming one's way through the weekend. Rice plate specials, wun tun noodle soup, fried rice, Spam and eggs, snackipoos, and buns.

The pineapple bun contains no fruit, being instead composed of a crunchy sweet crackled layer baked on top of a poofy body. Which can be toasted and buttered, or stuffed with sliced sandwich meat, or both. And the tea is strong, bitter, hot, mixed with sweetened condensed milk. 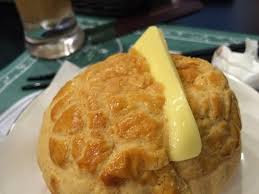 
The place where you enjoy such things is filled with elderly folks talking Toishanese, because that's what it is. Mandarin speakers do not feel entirely comfortable there, and the younger crowd does not want to be around their grandparents' generation, and in all likelihood can't speak any version of Cantonese anyway, having been born here. They watched only American programs while growing up, and find the weepy fifty part Canto television series unintelligible, darn well interminable.
Plus their version of loudness is different.
Video games and you tube.

But occasionally, they may visit.
Bringing their own beverages.
Litchi boba with squigglies.


Hong Kong people are picky and very opinionated about baked goods, but their American offspring just know that the dan taat at one place are the best, because everybody says so, and will line up whenever it's open.
They have to line up, because there are no places to sit.
Same with the bun snack place everyone knows.
But those places are the bomb!
They know that.

The queues are usually full of people speaking English.


Personally, I think that the daan taat at Wing Hing (永興餅家茶餐廳) on Stockton are the best; rich and flaky-buttery-crumbly and just oozing goodness when still warm. But I'm probably wrong.


Perhaps I'll have some salt fish and chicken fried rice this afternoon. 鹹魚雞粒炒飯 ('haam yü gai naap chaau faan'), with a hot cuppa, followed by a pipe and grocery shopping.