IT'S FUZZY, AND IT GRUMBLES

After hosting two young respectful hedgehogs for breakfast, the badger absented himself. This per the story in Wind In The Willows. What they ate was oatmeal porridge, and there was also bacon, and eggs, and, oh, lots of other good stuff! Hot buttered toast!

Badgers are somewhat solitary by nature, and in cold weather tend toward somnolence. And the Anglo-American morning repast is not a light affair.
If, after reading about such things, one felt like withdrawing for a nap, no one could blame you.


"The animals well knew that Badger, having eaten a hearty breakfast, had retired to his study and settled himself in an arm-chair with his legs up on another and a red cotton handkerchief over his face, and was being 'busy' in the usual way at this time of the year."


Not being a resident of somewhere in the English countryside, I do not have a red cotton handkerchief. But, now that Jeebus Day is finally here, and the mass-frenzy has finally died down, I wish I did.

I don't eat breakfast, by the way.

However, I must head down to Chinatown and find out which places are open today, so that I might secure a spot to eat. Dim sum places are quite out of the question, as they will be crowded with several generations, and fancy restaurants are not on the list either, for the same reason.
I want something simple, somewhere quiet.

After which I can fill a pipe and ignore the world.

More than one of you is too many.

I am the humbug.


I am torn between congee (粥 'juk'), in lieu of oatmeal porridge, which is kind of bland and mucky and not nearly as good with a yautiu (油條 an airy puffed fried dough stick), and something that includes pork or porky bits.
Plus a cup or two of milk tea.

The issue is really that I must smoke outside, as my apartment mate naturally has the day off. And she is a nonsmoker, so a badger must be considerate of her nose, and her teddy bear's sensitivities.

Ms. Bruin can be very fierce.

My own teddy bears are not nearly so imposing, nor as fastidiously inclined.
If I could, I would take one or two of them and my warm blanket down to an alleyway between Grant and Stockton where damned well everyone ignores the "no smoking with twenty five feet sign" (because obeying would put you inside someone else's apartment), and hide out till I've recovered from having too many people talking at once for several days.
But one cannot do that!

We white people are weird, as everyone knows, but such behaviour draws the attention of the police, and one does not want to be thought of as being in the same category as crack heads living under an overpass. 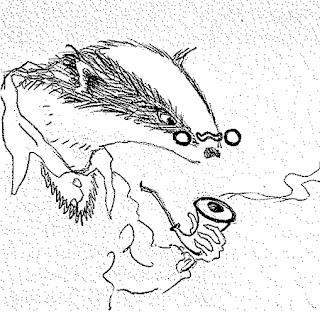 Instead, I shall retire to the bathroom and soak for an hour.
Heater on, cup of coffee, Nicaraguan cigar.
After that, late lunch.

Hi!
Thanks for sharing that blog post with us...
Hair Transplantation Centre in Lucknow

Your comment is Spam. But such innocent Spam! I enjoyed browsing the site advertising the services and skill of Dr. Rajat Kumar Srivastava , a well renowned Plastic, Cosmetic & Aesthetic Surgeon, who is currently practising in New Delhi & Lucknow.

There are several things there which aroused my curiosity, though I do not need and will probably never need them performed. I even looked up "male gynecomastia", which, it turns out, may be the result of eating too many laddoos.

Which is not a problem I have, but I imagine it is common in Lucknow. Rosmalai and rosgulla also contribute, in all probability. Shucks, the entire fabulous gamut of Indian mithai are probably complicit!
I haven't had a motichur laddoo in ever so long! Or jalebis, sevian ki kheer, sheera, gajjar halwa, phirni, misti dahi, rabri, raj bhog ......

They are all so delicious.