THINGS YOU NEVER TELL YOUR DOCTOR

Not that I have, but I shall never mention to my doctor that there are five health clubs and exercise studios within very easy walking distance of my apartment; he would suggest that I join. When in fact at work I have the equivalent of a ten or twenty mile hike every day (four days a week), and the only other exercise I want to have is traversing Stockton Street from New Honolulu to Little Wheat Field. All or part of that distance. six blocks total.
From the bittermelon omelette OR baked porkchop over spaghetti covered with melted cheese to the Portuguese egg tarts and red bean biscuits.

There are over a score of eateries in Chinatown to which regular exercise on my days off will take me, and that's plenty of walking.


Nor will I inform him of recent coughing jags in the morning. He would tell me that this indicates that I should quit smoking forthwith, while gaily ignoring the prevalence at this time of seasonal colds and respiratory ailments. Such as the one currently afflicting me, which is on the wane, and which I've been hiding during the working day because three of my co-workers are totally paranoid. As they should be.
But not because of a cold.


And surely everyone wakes up occasionally with a small stubborn gorilla on top of one's pile of clothing clutching one's wallet, and exclaiming happily "it is mine, I found it!" Such as happened recently.

If I tell that to my doctor he'd recommend counseling. "Subject is depressed, and hearing things". He would ignore the context (the private lives of stuffed creatures, the voices, the socialization of small furry entities), and go straight for the worrisome symptom.


I'm not sure, but I suspect that the good man does not encounter patients who regularly have to argue with a Froad, two monkeys, a sheep, and a cow, that the leathery thing does not belong to them, and they may not use the rectangular plastic card within to browse the internet.

Recently their number has been augmented by a turkey vulture.

Who wishes to have cadavers delivered.

We adopted Sydney Fylbert a few days ago, as an early birthday present for my apartment mate. He's from New York. Where, apparently, there are loads of fresh cadavers, why, the streets are positively littered with them!
And they're flat and crispy!


Remarkably, the bookseller with whom I enjoy regular late night weekly visits to places in North Beach returned from New York a fortnight ago, where he had a wonderful time. As he does once or twice a year.

Must be all those cadavers.

Most of my doctor's patients are Chinese American, and not given to voices.
Middle aged Dutch Americans are not a key demographic.
We hide ourselves extremely well.
With our beasts.
Shush!

Neither my doctor nor the turkey buzzard hold with such things, alas.

I have not found the piggy buns (猪仔包 'chü chai baau') yet.
But I'm still discovering good things to eat.
Always keep looking. 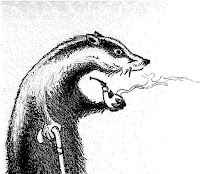 Interesting. It is difficult indeed keeping up workouts what with a wolf, a bear, a goat, as well as taking care of Herr Doktor W and keeping up a regular schedule of Mishna study here.