THERE ARE NOODLES HERE

A few days ago I explained my world with a Venn diagram, which ellicited a comment from a reader who identified him or herself as "Frau Doktor W", as follows: "It would also seem that some of your favorite people are Jewish bloggers, yes?"
Which is correct. When I started blogging it was in reaction to their essays, and to play in the same sandbox. And I still follow a lot of them, without actually playing in that sandbox very much anymore.

Thoughtful skeptical Jews with a background of some sort in Talmud.

As a number of the people with whom I interact on Facebook are.

The 'Atheist Calvinist Dutchman' within likes the stimulation. 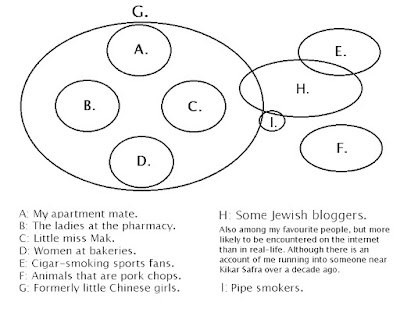 Much of what I consider my actual social life involves Hong Kong milk tea, fellow pipe smokers, people who used to be little Chinese girls (please see the group represented by "G" in the Venn Diagram above, for an explanation of which visit this post: Apples, Oranges, and Carburetors), and a significant number of Jewish bloggers.
It is surprising how much of said social life is via the internet.

Significant, but not included in the Venn diagram above are a seller of books and his circle, a karaoke bar with a mostly Cantonese clientele, a skeevoid hamburger joint, and two drinking establishments to which I have not been in a while. Plus kin with whom I communicate around the holidays, usually.

A Venn diagram should not look like a plate of spaghetti.


A part of my social life involves spaghetti.


As does a part not included in either Venn diagram.


I consider myself largely normal.

Email ThisBlogThis!Share to TwitterShare to FacebookShare to Pinterest
Labels: Venn

And so what led you astray from reading and interacting with Jewish bloggers? Inquiring minds want to know.

Hard to pinpoint any one cause, but discouragement from non-blogging Jews played a large part.

The one you met at Kikar Safra? Or like the "damn Russian Jew" in the wheelchair?