The way to keep ones sanity in these times is judiciously doing the following as alternating "therapies": make curry, study a foreign language, drink tea, take a walk, have a nap, read a reputable news site (BBC or Reuters), smoke a pipe. At least, that's my recipe. My apartment mate binge watches Crone Wars (the 'Real Housewives' of various places), Bat Masterson (old TV series), and Perry Mason. When she isn't working.
She often prefers going to the empty office instead.

Oh, and informing the stuffed animals that Trader Joe's does not sell squid bread, and carrion buns are entirely unavailable in this neighborhood. Do-it-yourself is ill-advised; raiding a graveyard is frowned upon. And think of all those chemicals! Perhaps order a cadaver from Amazon?
It's organic, and non-GMO.

The other thing is Facebook. Where you can post not only pictures of your cat, but drawings of some of your favourite pipes to a FB groupd dedicated to pipe-smoking.

Fifth and maybe final smoke of the day. Two neighbors across the way each on their side of the common fire escape having a long discussion. Few pedestrians. Other side of the block three bros blocking the sidewalk having beers (it IS friday evening...), so I walked around them in the car lane. When I got back to my street, Mr. Siu was returning home with his doggie. We waved. Finished smoking on the front steps. A good smoke. Calmness. Peace.

Out of the house before eight, after the breakfast of champion: a series of necessary pills and strong coffee. Small sandblast Canadian I restored over two years ago filled with Virginias. Said good-morning to the Canto auntie doing her walkies on the way up the hill. She's shorter and older, but her legs work better. After five or six blocks walking it's hard not to snarl at other pedestrians. So far this morning I've done twelve blocks. Presently in the teevee room while the apartment mate is watching Crone Wars (one of the Real Housewives episodes) with half an eye while plonking on her computer. 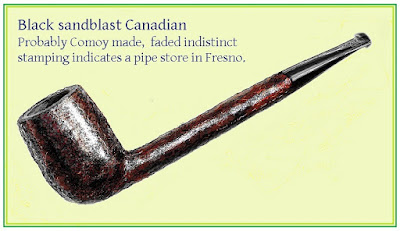 Both of briars pictured above belong together: same previous smoker, whom I never met. His eldery sister-in-law wanted to get all those icky things out of the house once his widow moved to smaller digs, 15 years after he died.
With a bit of skilled effort, they have returned to a rewarding life.
New stems, of course. Some men bite like sharks.

Now, what would you rather have? An object of sensual beauty clenched between your teeth, or cretinous bitches ("Real Housewives") on the television?

The stuffed turkey vulture was both bereft and aghast when I told him that crusty carrion baguette was unavailable. What IS this world coming to? To console him, I offered him some "tubular cadaver" (Italian sausage) with curry-fried Kwan Miao noodles (關廟麵), yau choi (油菜), and egg.
Chili paste (sambal) liberally daubed over.

As far as the penguins, who wanted squid bread, are concerned, sorry. There is no substitute. Y'all squid out of luck. The apartment mate prepared herself some tater tots and breakfast sausages for lunch. She's Chinese American, so you'd think that if anybody had a handle on fresh squid in this neighborhood, she would, and she offered them some of her food, but they claimed they weren't that hungry. They graciously nibbled a bit.
Just to be polite.

They did like the ice cream she had later.
Every one likes ice cream.

Early evening, after fixing myself a hot cup, I went out for smoke. My dad, a man of civilized and stable habits, would have a pot of tea on most weekend afternoons, and might occasionally take a pipe full from my tin of Balkan Sobranie. After asking, of course. At those times we'd sit together in the quiet, both of us reading and smoking. In the other room my brother would study chess (one of the top fast chess champs in the country), and the cats would occasionally wander in for some human contact. 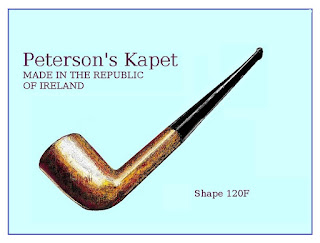 Luckily there weren't many people about. I likewise do not require much human contact. My apartment mate, with her rather severe Asperger's Syndrome and shy distaste for people, requires seemingly less than I do.
This morning she had a full load of it: volunteer work on Saturday morning's at the charity project organized by one of the local churches (she is a sneering skeptic, total unbeliever, and heretic) was more than enough.
Because during the current crisis the older volunteers have been told to stay home, she's one of the few there who can speak Cantonese (sort of), and given that most of the clientele are elderly local Cantos .........

It's almost, she indicated, like herding cats.
I got an earful. She vented.
Good for her.