Never really thought about it, but Easter is the most significant event on the Christian calendar. Which today is. For people like me it always meant disappointment that the chocolate bunnies were hollow, and just not very good. How can we be happy that someone in whom we don't believe has risen if the candy is so mediocre? As an adult, of course, I am not so candy focused; it's a good day for some roast lamb, or duck.
Neither of which I will have today.

For over seven years my Easter has meant an extra day off, for which I did not get paid. And no celebratory meats or chocolate. And, seeing as I live in San Francisco where we're all godless atheists and heathen heretics thank heavens, a simple meal in Chinatown or Little Saigon followed by a pipe.
The only question which tobacco celebrates the return of spring.

No, I shall not smoke "Bob's Chocolate Flake", by Samuel Gawith. Some folks cannot stand the chocolate odeur which adheres, others do not even notice it. And once you rub it out and let it air a bit, the topping is barely noticeable if even. It's decent tobacco. But hardly chocolaty. 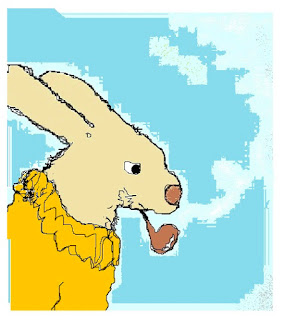 In any case, at six forty six in the morning, the most religious thing one can do is light up a short Romeo y Julieta and go wander around the block for while, seeing if the bums are up yet. They aren't.

The old lady across the street is. So are a few of the other resident elderly.
Good morning. And there's a man patiently waiting for the bus uphill.
Plus a lone jogger. Crows. Seagulls.
A pigeon or two.

[And the old Cantonese auntie with the gay pistachio ice cream hued hat, whose morning exercise is to walk halfway down the block with her shopping bag, turn around, and walk back up. Several times. It almost looks like she's happily skipping, despite stiff joints.]


The weather is warmer than it had been. Bathrobe and jammies are now enough covering outside. And while tempted to not bother changing into regular clothes today, I shall nevertheless at some point shave, shower, and get dressed. Because out of respect for the demise of chocolate bunnies it would only be proper to do so. I pity the poor crappy-tasting chocolate bunnies. Life is so short, and at the end, disappointing.
The first thing to go are your ears.
Then your legs.
Sad.

No, there is no metaphor. Or if there is, it is laboured and not worth noting.
But one cannot walk for several blocks in one's bathrobe smoking a pipe by mid-morning. It's just not done. Even if the bathrobe is dull grey and somewhat stained from spilled coffee. Or smells funky.


On Easter, one must rise, and act human again.
We celebrate with good tobacco.
And a bad attitude.


I lament the bunnies.

Email ThisBlogThis!Share to TwitterShare to FacebookShare to Pinterest
Labels: Easter