Yesterday was a real slice. The mind said "carry on, maintiendrai, sally forth with confidence!" The body, however, said "no way" and "get bent, old guy". And proceeded to feel wrecked for most of it. Achy. Tired. Result of the third shot. Which makes three prophylactic injections to prevent Covid. Because unlike Florida or Texas, this blogger has a brain.

Still, better than the old guy who took a tumble on Jackson street opposite Hue An.
I've seen him around the neighborhood. He dodders.
But kudos for ambulating! 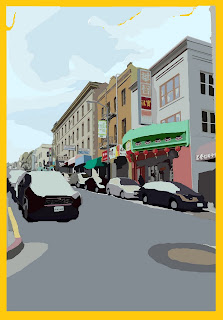 Hue An is up the street from the old Washington Theater. Which closed down years ago, after a long run of really mediciocre and downright questionable films. The antique gentleman probably went there back in the day, when he was still young and sparky.
Jack, whom I met twice yesterday -- once because he ate at the same chachanteng, the other time as a fellow witness to the old gent's slippage -- sadly remarked that the neighborhood had changed, every body he knew was dying.
Well, in a way, yes. But there is still lots of life in the old gal. Little kiddies are everywhere, plus vibrant and rather well-behaved teenagers, younger entrepeneurs, fairly recent immigrants .....

I saw 'Mr. Vampire' at that theatre. And I like change; it isn't a bad thing.
Although I do miss the coffee shop where I used to have snacks.
Before I'd head up the street for cinematic entertainment.

It seems so innocent, doesn't it? Coffee, slice of pie, and a Hong Kong movie.

But things are looking up.