CURIOUS ABOUT THE WEIRDOES

In every large company there are bound to be some strange fish flying undercover. You don't know the level of their (in)competences, or how eccentric they are, until the office Christmas party. When you end up in conversation. If the company is one large happy family, as we are told, we have to realize that some of its members are seriously dysfunctional and should be locked in the basement whenever there are visitors.

I don't know where I'm going with this, but I'm thinking of the computer company where one of the engineers repaired his underpants with duct tape, and the toy company where one person had a six pack in his credenza for the occasional cocktail party at twilight.

I have neither tape nor Budweiser.

I am not a genius.


The time of office parties is upon us. Or rather, upon you. I don't work in a large company, and therefore I do not have to worry about drinks with Fester in engineering or Dingo in Operations.
Nor about chocolate covered bacon strips sent to us by the salesreps in Iowa.
Not even Amber in Idaho answering the phone with "Welcome to Boise's Toysies where we're having a stupendous fun-filled day! How can I help YOU?" She always sounded so let down whenever I told her I needed to speak to Bob about a past-due invoice.


I think Bob was the basement dweller at his retail establishment. As a complete segue, I should mention the common pattern at many retail establishments of hiring blandly inoffensive people over bitter competent people. Which is why little cottonwool brained Jennifer got the job, and multiple piercings and tattoos Gunther didn't.

If you are bland, dumb, and inoffensive, Bob has a job for you.


During the first year I worked at the computer company it was located three blocks from my apartment, and the toy company was just one easy cablecar ride away, easy walking distance from excellent food. Not so where I presently work, but I can get away with having a pipe in my mouth, and the air out back is frequently blue from the elderly cigar smokers and their bodily emissions. And judging from the conversations I have overheard, all of them are the dysfunctionals who need to be locked in the basement when the normals visit.
I'm not sure that I'm much better. 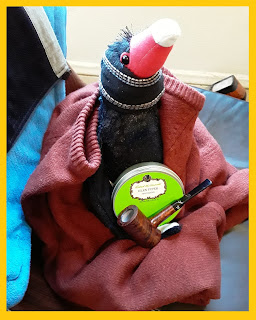 The computer company as well as the toys enterprise are never far from my mind; I have computers (four of them) and toys. Plus rambunctious stuffed animals with social dysfunctionalities. One of whom is now poncing with one of my pipes.

Be honest. Do "the normals" ever visit?

No, I don't think they do. Whatever web-search brings people here is usually odd. Normals search for such things as "kitten Trump" or "turkey with gravy for Methodist relatives this year". You know, normal stuff.