THE USE OF THINGS

There's a river outside, and there are mosquitoes. Still air, humidity, and something rustling down below the veranda. Which is very probably this evening's dinner. The idea of taking a typewriter with one into this area was not practical, no writing will get done, and even the ballpoint pens don't work. The pencil barely smudges the moist paper before ripping it.

The idea of smoking a pipe or a cigar is very nice.
The supply of cigars has developed mildew.
The pipe tobacco never dries.
Matches don't work. 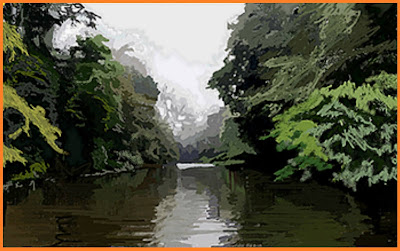 A friend in the tropics bemoans the difficulty of getting supplies from the temperate zone. Luxury goods from England or California would relieve the tedium, he says, and what he means is marmalade, the newspaper, coffee, and better weather.

It was his typewriter. Parts of it are stuck. Can we make it function? We shall make do with the tools at hand. Ashes from the cooking fire are as good a gentle abrasive as any, and there is soap to get the muck off our hands. Ashes and vegetable oil. Then soap. Then set it near the fire, because residual moisture in the wheels will attract ants.

It finally ended up working again, after a fashion.
The paper had to be gently encouraged.
And the typed text had halos.

What you need, in this climate, are fountain pens and Parker ink. And, probably, non-glossy paper to draw on. Glossed paper has a layer of starch and pipe-clay that is too hydrophilic, and will turn to slime. These are things I hadn't thought about before. And I'm discovering ever new uses for baby powder, specially formulated for this region. It probably has strong chemical dessicants. Might even contain insecticidal stuff. Best not think about it.

There is a reason cigarettes come in tins.
Tight tins keep the bugs out.

I never did open the big bottle of Kaopectate.
But the aspirin started falling apart.

When I was still living in the Netherlands, a friend in his fifties was chosen by the Dutch Catholic Church's missionary branch to head into the tropics to a headhunting tribal area. He was an absolute agnostic, damned well a complete atheist, but he was a water engineer, and they probably thought that drainage and irrigation would be of more immediate benefit, time to worry about the souls later. They were probably right about that. He arranged to have twenty crates of whisky shipped ahead. The headhunters probably found that useful too.

I wonder if it was enough to last his four-year stint.
It's medicinal, and a good sterilizer.
Trade it for chickens.