A friend mentioned that when he was in the army, like everyone he smoked mahorka. Belmoro Canal too, but there were profound differences in Belmoro Canal depending on which factory made it. And I should mention, that like any civilized person, he nowadays happily puffs a pipe filled with fine Latakia mixtures, and only thinks about those more brutal days occasionally.

I myself never served in the Russian military.
Neither during Soviet times nor later.

My fond memories of a misspent youth made odoriferous by tobaccos involve gently refined Maryland ribbon in my pipe (before I discovered Balkan Sobranie), and the dark Dutch shag tobacco rolled into stinky ciggies by my classmates.


So I find the idea of watermelon strawberry vapes a little hard to grasp.
They probably go well with a raspberry swirl venti and soymilk.
Which is also a hardly graspable concept.


The morning wake-up must, in a civilized world, involve strong coffee, decent tobacco, and a bleak tromp through the thick fog on Nob Hill quietly lamenting the sad disappearance of rope factories and salt works where gainfully employed children may learn useful habits like clean hands and polite speech, instead of jogging in fancy sports togs on the way to Starbucks without stopping to pick up their dog poo.

We live in a sissified age. 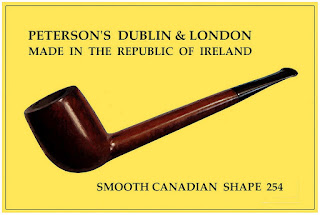 Today's bout of sneering at the modern era and its soft "Athenian" yuppiedom involved a red Virginia in a pipe manufactured years ago in a harsher more Spartan time.

It was enjoyable and instructive.
Good for the soul.

Like the meter maids cruising along Clay Street writing tickets (no parking between 7 and 9 AM on Monday because of streetcleaning, all you morons), I disapprove of many things right now, and wish to inflict self-doubt and internal torment upon others. Not because I feel mean, simply on principle. It is too early in the morning to approve of modern society's callow consumerism, flavoured coffees, cell phones, or dog walking and jogging.

It's time for my second cup of coffee.
I'll probably be nicer after that.

Mahorka sounds like something you'd spit up.
I've never smoked it, or Belmoro Canal.
I imagine it tastes like hairball.