ADJUST FOR BUGS IN THE AIR

Several of my father's colleagues fondly remembered Java before the war. Quite a few had somewhat harsher memories of the post-war period. This division (actually an overlap for a few of them) was quite natural. Before the war they were still teenagers or children, afterwards they were in displaced persons camps, besieged in cities, or involved in the "politionele acties" out in the countryside. For the Dutch, Java in the late nineteen forties was not the same.
And after that, it wasn't theirs anymore.

My memories of jungle country are different. Not Java -- there is almost no jungle left -- and not imbued with threat. Just random dangerous things, because scratches, bruises, and cuts, get easily infected in that climate, and there are some horrible infections to be had, along with animals that either threaten or react as if threatened. Which depends on size.
And I spent very little time in that terrain.

Even here in California, I avoid wilderness areas. There are things out there that wish to cause discomfort or physical debility. Dry all wet surfaces, avoid standing water, use medicated foot and crotch powder. Wear loose clothing, disinfect insect bites. Be wary of contact with plants that are unfamiliar.

Watch out for booby traps. Especially in the Emerald Triangle.

I'll frankly confess that I prefer the urban zone. 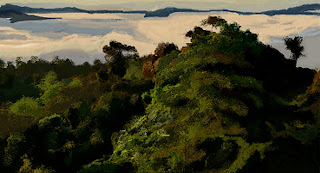 Actually, any place where food comes in shops, hot sauce can be easily found, and efficient motorized transport is not uncommon. And in hotter weather, clean potable water, insect repellent, and perhaps air conditioning.

Mosquito netting is a marvelous invention. So is curry, but really that's all you can do with scraggy chicken. And without regular cups of tea for hydration and the fact that making it requires boiled water -- kills the boojums -- civilized life would be nearly impossible.


One of my friends recounts the time he spent in the wilderness out in Utah. So very far from civilization, oh it was glorious, the open spaces, the fabulous rocks, the clean air.... the lack of savage city folks with their cell phones, blaring music, news programs, intent on killing him.
The freedom and security of a recreational vehicle with a water tank.


Heading out soon to shop for food. And hot sauce.
A snack in an insect-free environment.
And a spot of milk-tea. 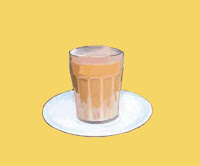