WHERE ARE THE CHINS?

It is very disturbing that so many people like me look like me. I would like to think that I am unique, but apparently I am not. Most other pipe smokers in the white man's world have beards too. There are only so many selfies of very likable chaps with beards and pipes that the mind can process before it starts running down the street in its undies screaming.
Well, that's the mind, in the minds eye.
A purely mental street.

When did every other pipe smoker out there decide to stop shaving? I'm not asking about the smokers of aromatic pipe tobaccos, because they're young with crappy tastes and multiple piercings, who only puff that shite because they have a Gandalf fetish or wish to be vikings, but civilized well-adapted people with sound judgment, for whom a pipe is not an expression of their personal sense of adventure and their bold and sometimes quite reckless defiance against bourgeois social norms.
No existenzangst in their equation.
You know, normal people. 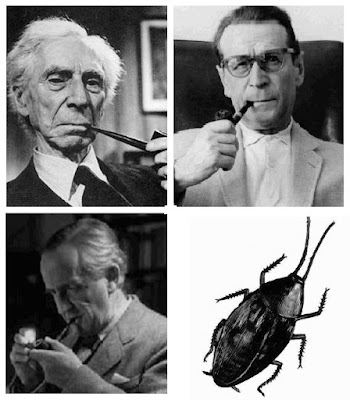 Well, one of the brilliant minds with pipes pictured above may have had a Gandalf fetish, but he dabbled in aromatics only occasionally -- probably when he was wearing a leather diaper and metal studs, trolling for dissolute Cambridge students in the seamy underbelly of British academia -- but to the best of my knowledge, most of the time he and the other three were stable sane individuals, who enjoyed pipes along with much else.
Please note that they do NOT have beards.
Not a wizard or viking there.


My beard is neatly trimmed, and if it expresses anything at all, it's not my unique individuality or my daring attitude toward life, but merely the fact that hair grows out of my chin in a neatly demarcated zone, and only with civilized restraint, to a certain length and no further.
Oh, and velcro as an aesthetic.
Plus soup. Trapped soup.


Nowadays nearly every pipe smoker has a beard.
The avuncular look is in.
Goats.


Some of you, shave.

Apparently people do read this blog, not just Russian bots.
Judging by a recent comment (sixth one down) under this post: First badger picture ever.

It referenced soup in the beard. Which was in today's post.