DO NOT TOUCH HER TEA CAKE!

Some dingbat in the advertising Standards Authority doesn't want me to enjoy my tea cakes, and that irritates me no end. Especially as until moments ago I didn't even know that I liked tea cakes.
Specifically, Tunnock's Tea Cakes.

I had to visit the internet to find out what they are.

"Soft marshmallow on a biscuit base fully coated in real milk chocolate."


What roused the ire of the Advertising Standards Authority was this ad: 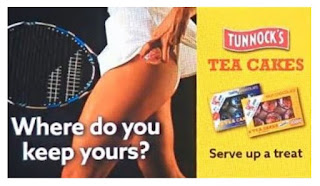 It gave me an appreciation for tennis I never had before.

Per Wikipedia: "A teacake in England is a light yeast-based sweet bun containing dried fruit, typically served toasted and buttered. In the U.S. teacakes can be cookies or small cakes. In Sweden they are soft round flat wheat breads made with milk and a little sugar, and used to make sandwiches, with butter, and for example ham and/or cheese. In India and Australia a teacake is more like a sponge cake. Tea refers to the popular beverage to which these baked goods are an accompaniment."

And: "The Tunnock's Teacake, made in Scotland but popular throughout the UK, is a chocolate-coated marshmallow with a round biscuit base. The dome comprises Italian meringue, a whipped egg white concoction similar to marshmallow, encased in chocolate."

There's an entire world out there I did not know existed.


Normally, I associate teatime with either a wife biscuit (老婆餅 'lou po beng') or a very similar red bean confection (豆沙餅 'dau saa beng'), even a preserved egg flaky (two types: 皮蛋酥 'pei daan sou', 鹹蛋酥 'haam daan sou'). And a multitude of other scrumptious things from C'town bakeries.
In England of course hot scones with clotted cream and preserves, such as is not uncommon in Devon or Cornwall. Perhaps Dundee Cake.

The Tunnock-style item probably became better known or more widely distributed long after I returned to the United States.

They may have it.