Scrolling through other people elsewhere can be rewarding. Sometimes you see things that spark the imagination. Quote: "that looks like some bougie mac&cheese... I'm gonna hafta make some of that, 'cause I'm bougie". It turns out that he wasn't 'bougie' enough, seeing as he objected to the Brussels sprouts being added. Sprouts. In mac&cheese.
I'm afraid I'm not bougie enough either.
Y'all some evil white folks.
That's just nasty.

Mordechai used aged Cheddar and Gruyère for his version. But he probably didn't add sprouts, yams, or corn bread. He doesn't strike me as bougie at all. And I subtly suggested that he do a Boeuf Bourguignonne sometime, but adapt the recipe to make it more Judaically acceptable.

Do NOT add Brussels sprouts.


Shortly thereafter a friend in South Carolina posted a charming photo of domestic happiness. Featuring an adorable presence in her life. 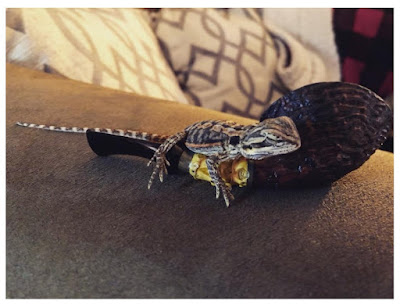 
That is a seriously blissed-out lizard sleeping on a sandblasted quarter bent pipe. Thus preventing its owner (Mary) from filling it with tobacco and smoking it. She probably chose another briar instead.

It's the sweetest thing I've seen all week.