A PIPE SMOKER WITH CIGARS: THE FOUR PART PROJECT

This post will be updated as things progress. At nine thirty A. M. on Tuesday morning, February thirteenth, I'm only twenty five percent through the process. So the rest of it will come over the next day or two.
And I've got a cup of strong coffee.
Which is a good start.


A few days ago a sales rep came bounding in, all bright-eyed and cleanly pressed. He wished to introduce three new products, and they were glorious! Three!

Some sales reps are charming when they've had caffeine.

I certainly warmed to him.


The net result was that I ended up with a total of four cigars to try. One of which I had already smoked twice, but I did not tell him that. They're good products, made in Nicaragua. Many of the finest stogies come from there nowadays, and they blow the mediocre shite from Cuba right out of the water. Fortunately Europeans, Arabs, and Chinese don't know it.
They're still smoking that crap from Havana.
And paying for the "privilege".

Here's some news, guys. The United States lights up over twenty percent of Cuban production. Yet of the top twenty five cigars for 2017, only four were actually Cubanos. Just four. Only four. Nebbech.
Probably a mistake. I've smoked 'em.
They are really not very good.
Nicaraguans are better.
And Hondurans.

The brand was reborn two years ago, and the backstory is a little too fey and pretentious for my taste, but the cigar industry has always been more than a little goofy in it's marketing anyway -- "nothing says Valentine's day like a cigar" -- and many of the younger set who smoke cigars are tattooed monsters and junior lawyers, so you have to make allowances for that.
Thank heavens they broke away from Jägermeister and craft beer.
Now if we could only get them to vote rationally.

In any case, damned fine cigars.

Presently down to the last inch. It burned a little irregular ten minutes in, and I had to retouch it with the flame twice. But it has a very uniform and even burning zone right now, and I'm not putting it down. It's satisfying and earthy. As well as presenting some spicy woodsy notes. Quite enjoyable. The day looks very promising at this point.
Wrapper: Ecuadorean Habano of a warm silky umber hue.
Binder and filler: Nicaraguan.

UP NEXT (AS I GET TO THEM): SEÑOR ESUGARS, MERIDIAN, AND THE DADDY MAC.
Expect changes to this post.

All of them are robustos, of a very appetizing appearance.
I think I may go downtown and trigger some office workers by smoking in front of their building. But first I must bathe and do laundry. My clothes smell all fusty after a week among the cigar aficionados.

Actually, what a cigar very probably says is that you're a crusty old dingus anywhere between twenty and one hundred years of age, without romance in your life, and probably Latin or Dutch. And that Tuesday and Wednesday are your weekend, your tolerant apartment mate has a poor sense of smell and wishes some woman would civilize your stinky ass ("it's been years, fercrapsakes!"), and you eat by yourself most of the time.

Yeah, Kipling said something about that.
A very Victorian sentiment.
Dry old bean.

Started this one just before eleven thirty. It is rich and satisfying, but not blow-your-head-off full. More of a solid medium. A nice morning smoke. The wrapper appears to be a corojo, possibly even somewhat rosado. Not as uniform in appearance as the Venganza, variegated and a little shiny, but this cigar is a much more well-behaved smoke. The ash tends toward darker on the outside, fine and white within. It is utterly delicious.
Hands down a top notch cigar. Creamy, faint chocolate, a whisp of fruit.
Did not need any touch-up with the flame at all.
Great with another cup of coffee.
Wrapper: Brazilian.
Binder: Ecuadorian.
Filler: Nicaraguan.

I still need to head out and do laundry.
But this cigar isn't finished yet.
May have to pong a bit.

On Tuesday nights I often head over to Chinatown to meet the bookseller for drinks and madness at a dive we've been going to for years. It's a tradition. So I left the house an hour and a half earlier, intent on smoking the cigar before his bus landed at Grant Avenue at eleven thirty. I spent over an hour watching the rats in Spofford Alley. The city announced a scheme to improve and beautify the place over a year and a half ago, with great fanfare, and it was supposed to be done this past Autumn. With typical efficiency it isn't even approaching the finished stage. But, as a direct consequence of their labours, it now supports a vast population of rats.
Who traverse the various levels of unfinished pavement and ditch like familiar and beloved village streets, sometimes speeding down the entire length of the alley from point A to point B, singlemindedly heading for the garbage dump where it intersects at Clay Street. They are charming, lively, and bold. At least three out of more than two dozen are a whitish-tan.
They are elegant and lovely creatures.
This blogger loves animals. 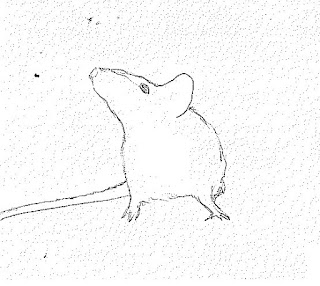 The cigar is quite nice. Dark and spicy. Not quite as good as the previous one (Daddy Mac), but nevertheless the perfect cigar for watching wildlife. Medium body, earthy and peppery. It has a sweetness.
It is nevertheless packed with flavour.
Stephen Bailey, the owner of Cornelius & Anthony, named it after his dog.
Wrapper: Mexican, dark (San Andres).
Binder: American (what ?).
Filler: Nicaraguan.

This review was written after three in the morning.
It was a very good evening, by the way.

Having been a pipe smoker since my teenage years, I don't often go through so many cigars. It's enjoyable, but weird and intoxicating.
The apartment building is quiet, but from the nearby intersection I hear the noise of earth moving equipment. Rarely any other sounds.

The Meridian Robusto, by Cornelius and Anthony is an enjoyable mildly resinous product, that while it does not make any brash statements does hold your attention and gild the time you spend with it. The last two inches are contemplative. A classic and very lovely wrapper leaf, with a slight sheen. The cigar is semi firm, soundly constructed, no touch-up required. Woodsy notes with spice. Easy draw, regular burn, and a hint of oak.
I enjoyed our time together, and wish there were more.
For the first smoke of the day this is truly top notch.
Wrapper: Ecuadorian.
Binder: Nicaraguan.
Filler: Nicaraguan & Dominican.

The only problem was that during the final inch the flaky white ash kept depositing on my keyboard as I typed. I need to vacuum.

Best weekend in a long time.

Email ThisBlogThis!Share to TwitterShare to FacebookShare to Pinterest
Labels: Cigars