When I got up this morning my right nostril was plugged quite solid. It may have influenced my mood; normally I am sunny and bright, filled with good will towards all, and just brimming over with the milk of human kindness. At six A.M.: snot. Cement-like snot. As a smoker, besides being a liberal, that's what you'll get at six in the morning from me. Plus plumbing noises.

I am much better now.

I have realized that nearly the same amount of serotonin can be released into the system by drawing that second cup of coffee, rather than swilling it. So I drew it. 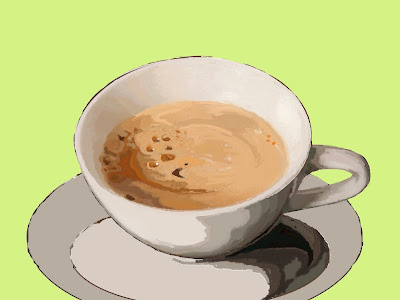 Yes, I did have a second cup. I'm not crazy.

Now I am cheery and mellow.


As I said: cheery and mellow. Sunny, bright, and good natured.


The milk of human kindness went into café au lait.
Time for yoga in my hot tub.