Charming. From Wikipedia: "Tarantula hawks belong to any of the many species in the genera Pepsis and Hemipepsis. They are one of the largest parasitoid wasps, using their sting to paralyze their prey before dragging it to a brood nest as living food; a single egg is laid on the prey, hatching to a larva which eats the still-living prey."
End cite. 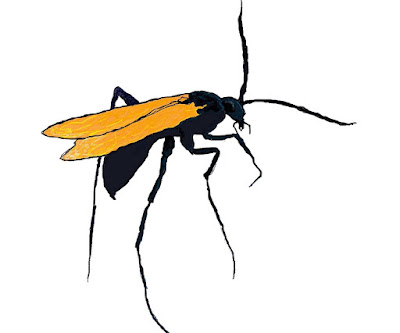 Further from Wikipedia: "Tarantula hawk wasps are relatively docile and rarely sting without provocation. However, the sting -- particularly that of P. grossa -- is among the most painful of all insects, though the intense pain only lasts about five minutes. [CUT] Aside from the possibility of triggering an allergic reaction, the sting is not dangerous and does not require medical attention. Local redness appears in most cases after the pain, and lasts for up to a week."
End cite.


It's the official state bird of New Mexico.