The other day I posted a selfie on my Facebook page with the caption "dammit, there's a wattle!" Which was visible between the gold band of the pipe, the beard, and indiscreetly flobbeling just above the collar of the tee-shirt. Responses were supportive. My friends seem to believe that it's natural and to be expected.

Where did this alien growth come from? I did not used to have a wattle!
And I am displeased.

Time to massage the neck with lard, I guess.


What no one commented on was the pointiness of my head. Which has not gotten any worse with age, although the contents of that cranium probably have. Or the neatness of my beard, which takes effort.


That, and the fact that no one was triggered by the fact that I was smoking lead me to believe that outside earthmom nature freak circles there is hope for this world. At least among my circle of friends. None of whom are climate change denying anti-vaxxine no-mask activists. Though one or two of them might be closet vegans, very discreet about their doubtfulness and failure as human beings.


Also visible are various ceramics, sample jars of pipe tobacco, doodads, and the large rump of a wayang figure. 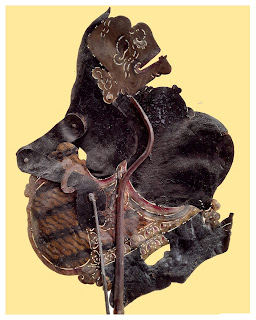 Wherever Kyai Luro (Semar) is, he is the hero of the tale. As anyone would recognize. Because he knows more than anyone else.
And has been around since before existence.

But he doesn't always dominate.
Sometimes he hides himself.

As I wish my wattle would.