A few years ago I was enjoying a cocktail at the Occidental. It was a lovely summer evening, the door and the window were open, and I sat at the table near the window with my beverage and pipe. Then soon noticed that the briar had been ghosted by PS Very Cherry, with which I had experimented a few days earlier, to see what perverts like, and the partner on shift that evening came bustling out from behind the bar determined to find out which sexual degenerate was smoking the flavoured cigar in a place devoted to austere appreciation of fine tobacco products. Dammit, it had to stop!
When he passed by again, I had put my pipe down.
Told him that it was the vapesters outside.
Young profligates.


The Occidental is a cigar bar in the downtown; the austere appreciation of cigars must include thoughts of the warm plump thighs of Cuban women; Stokkebye Very Cherry is a relatively clean-burning aromatic pipe tobacco which will influence the next few bowls smoked in that pipe but be gone fairly soon if not hot-boxxed; the pipe is clean now, and normally I smoke only Virginia and Perique blends as indeed I did that evening.
Fortunately I had another pipe with me.

This was during the period that on alternate Sundays I would light up an aromatic just to see the expression on my coworker Hector's face when he realized what I was doing. As a severe puritan, he's right up there with the partner at the Oxxy. Who knows that I too disapprove of aromatics and normally never touch 'em. 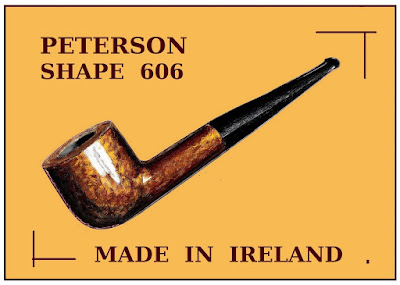 There were also a few times when I smoked the Whore of Babylon.

[Whores are mentioned a huge number of times in the Bible, but the Whore of Babylon is specifically from the New Testament, book of Revelation, chapter 17, verses 1 through 6: "And there came one of the seven angels which had the seven vials, and talked with me, saying unto me, Come hither; I will shew unto thee the judgment of the great whore that sitteth upon many waters: With whom the kings of the earth have committed fornication, and the inhabitants of the earth have been made drunk with the wine of her fornication. So he carried me away in the spirit into the wilderness: and I saw a woman sit upon a scarlet coloured beast, full of names of blasphemy, having seven heads and ten horns. And the woman was arrayed in purple and scarlet colour, and decked with gold and precious stones and pearls, having a golden cup in her hand full of abominations and filthiness of her fornication: And upon her forehead was a name written: mystery, Babylon the Great, mother of harlots and abominations of the earth. And I saw the woman drunken with the blood of the saints, and with the blood of the martyrs of Jesus".]

Which is also known as "Molto Dolce".
It's a very popular tobacco.
Sutliff spaghnum.

It's still made, but no longer available locally, because of several municipal ordinances forbidding flavoured tobacco products in order to protect the children, who would otherwise be mobbing tobacconists for this fine product which reeks appetizingly of vanilla, caramel, honey, a hint of chocolate, and an underlying fixative aroma vaguely reminiscent of coconut essence.
Plus embalming fluid and petrochemical by-products.
Which appeal to young people.
As is well-known.

I haven't stuffed it into a pipe in several years. The last time, it left my mouth feeling like a smoldering ruin, like something had crawled in there and died a violent death, festering, like a plague-zone with zombies.
Couldn't smoke at all for the rest of the day.
My doctor would've approved.
Delightful.

Molto Dolce is NOT a pipe tobacco which my father would've tolerated ("good tobacco does not smell like a French cathouse"), and both of my grandfathers would have likely sneered at it. One grandfather was a World War One pilot who passed away several years before I was born, when such heavy aromatics had still not been invented, and the other one was an army surgeon and doctors either smoked Camel nonfilters ("more doctors smoke Camels than any other cigarette") or Lucky Strikes (20,679 physicians recommend 'Luckies'). Molto Dolce smells for all the world like Hugh Hefner.

It's perfect for pissing off Hector. Made his fine Nicaraguan stogie taste like burning garbage, apparently. He withdrew to the far end of the room glowering and muttering. Priceless.


Many of the aromatics I have sampled were enjoyed (if that's the right word) on days that I worked with him. All of the various Sutliff aros, several Peterson mixtures, and a few other very odd things.

The lovely Peterson pipe pictured above does not whiff of perversion even in the slightest. Smoked it over the weekend. When people remark that they love the smell of a pipe, it reminds them of their father, what they're actually saying is "why don't you come over to the dark side, big boy".
And suggesting that their relatives were inbred. 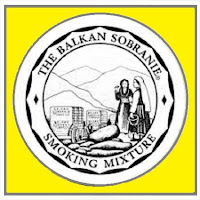 My father (a WWII bomber pilot) for many years smoked a mixture made by John's Pipe Shop in Los Angeles, and gradually gave up the pipe after we moved to the Netherlands. Except if I had a tin of Balkan Sobranie lying around after tea time or dinner. Especially on weekends.
He'd snag a bowl and recapture memories.