SOMETHING I NEVER LEARNED

Most of my days off this time were spent drawing/painting Chinatown on the computer. No, not a lot of results. But the picture below rather pleases me. Several muted pastels, lines and rectangles. Distance. 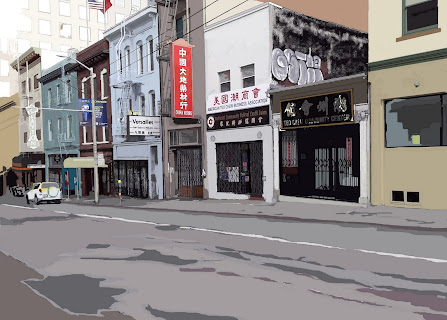 The social club shown here is just below Kearny on Clay. Near Portsmouth Square, and the new Sam Wo restaurant, which is further up, and scarcely a block away from the pyramid.

I know frighteningly little about the Teochew language, basically only that it is one of the southernmost Min-Nan tongues, and so more related to Hokkien and Chuangchow, far less to standard Cantonese. Most people in Chinatown, of whatever origin, speak or at least understand Cantonese.

To put it differently, think of the relationship between English, Dutch, German, Frisian, and Danish. Some similarities, related, many "cognates", no real mutual intelligibility.

I've heard it often. But never understood more than a word or two.

Mandarin is as far from these languages as Icelandic from Dutch and German.


I suspect that there is a statue of Lord Kwan inside, facing the door.
He's a patron of business enterprises throughout the south.
And note that his temple is half a block away.
Close to the Financial District.
Which is appropriate.

I really enjoy mapping out the grey zones in the pavement.
Can't explain why. Something about ziggizags.