Third cup of coffee. Sometimes you get so caught up in what you're doing that you almost forget to breathe. During the second cup I read an article about Coelecanths that Charles had mentioned, which was fascinating. Then I lit up my pipe and made a third cup. The combination of antique fish and tobacco, and the painting I was working on, made the world disappear.

The reflection of light through the slits in the blinds bewitched. 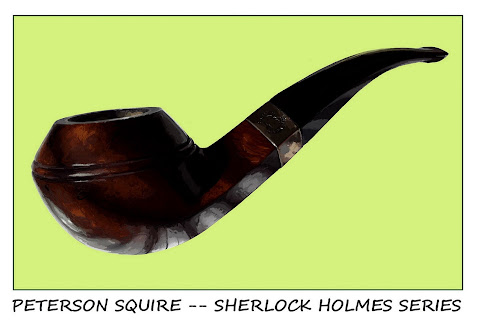 Peterson Squire, a bent bulldog.
After I finished the illustration, I looked at the large plastic lizard perched near the bookshelves with Talmudica and MacBarens pipe tobacco. Several tins there that are a decade old, and now probably very nice from the aging, but I have no curiosity in opening any of them; let them sit a bit longer. The top of the case has wayang dolls and pottery items, including some tea equipment. And two bronze frogs.

The two Chinatown street pictures done in the past week please me, yet there are flaws in the ointment, so to speak. Too many mute greys. 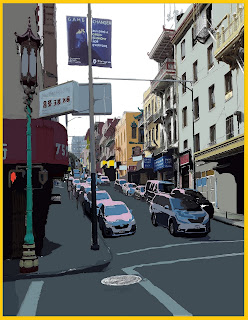 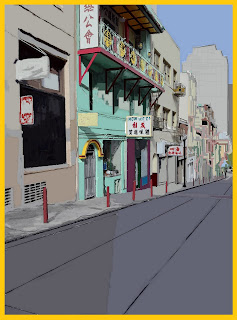 Chinatown: Commercial street
I'll have to go down there before the day gets any warmer. It's already eighty degrees, well beyond my comfort level, and tomorrow is going to be hell, because for some sadistic reason we never turn on the airconditioning at work. By the early afternoon I expect to be in constant agony from the combination of meds and oedema, and the effect of heat making it worse.

What with being passive-aggressive, and the strong silent type (hah!), I will probably not say a damned thing, or if I do, resign myself to that not penetrating in the slightest.

The boss already thinks I'm too old and decrepit to work, despite being a decade and a half younger than him. He's got heat toleration out the ears.
And believes everyone has it.
Or should.

It's only during hot weather (anything over seventy five degrees) that high blood pressure and the side effects of medication are an issue. Well documented, possibly deadly.
But suburban Americans believe that if you suffer, you deserve it.
It's probably all your own fault, and in your own mind.
Bootstraps, you pansy, man up!


[Amlodipine Besylate is used to treat high blood pressure and coronary artery disease. Side effects include swelling (oedema), tiredness, stomach ache, and nausea. It's a long-acting calcium channel blocker that works by increasing the size of arteries. It's also the first choice for Raynaud's phenomenon (yep, got that too). And note that many if not most high blood pressure meds worsen the effect of heat, because they can (and will) affect body temperature control.]


I like San Francisco. Marin, Oakland, and Berkeley are the devil's armpits; culturally, culinarily, and socially a wasteland. And beyond the Bay Area there's human trash, trailers, beer-sodden alcoholics, and small burgs filled with hicks and Proud Boys. Screw them all.

Global Climate Change, which I've been told many times doesn't exist and is all a commie liberal plot anyway, is going to make it all worse.