After it rained I went outside to the front steps with my pipe and a cup of coffee. Nice, quiet, the occasional bus rolling past. Once or twice a dog-walker heading up the street with their pooch. In this neighborhood there aren't many large hounds, mostly pint-sized beasts of the terrier or squatty space-alien variety. Over at the nearby intersection old people with shopping bags ambulating slowly, not together, not in groups. Alone, in the peacefulness of the morning, getting their shopping done early.
It is not as cold as it was yesterday.
And the winds are gone.

My apartment mate went to the Chinese graveyard for early observance of Ching Ming (清明節), tomb sweeping day. Which is actually next Saturday (April 4), but who knows what life will be like in a week? Some foods for offerings, plus sticks of incense and candles. And a bottle Remy. Not being a Christian, she can throw the believers' fearful disdain for so-called heathen practices right out the window; she won't go to hell for this.
But she doesn't want her forebears to wonder where the current generation is this year, why have they not come?

Even the dead get lonely at times.


I wonder how the ladies at the pharmacy are holding up. As well as the staff at the clinic. The neighborhood they serve has a lot of old people.
Things will change.


Today was a perfect day to sit home all day reading books. An occasional venture outside for a pipe smoke, pensively and slowly wandering around a bit, digesting the recently read texts, calmly avoiding any and all human contact, sometimes nodding a greeting from several body lengths away. As a pipe smoker in San Francisco I am used to people treating me like a plague carrier, but this is less than normal. Even factoring in the shelter-in-place orders, and the six feet or more guideline. No anti-tobacco nuts.
So in one sense, it is very enjoyable. 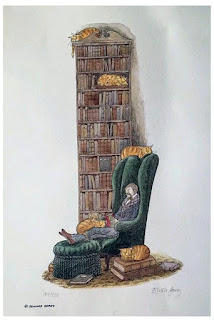 Unlike the chap with the cats pictured above, I do not have an Ottoman or comfy over-stuffed green armchair. My book shelves don't go up as high either. I have no cats. And that moustache is far too old school.
It looks stupid and unwieldy.

Indian Food: A Historical Companion, by K. T. Achaya
An in-depth and fascinating detailing of sub-continental cuisine, eating habits, and social attitudes towards food by chemist Kollegal Thammu Achaya. From Kashmiri cooking customs, through the mediaeval courts and ancient religious practices down to to the Mughals and modern sub-cultures, as well as a grand overview of Bengali fish and mithai.

The Anglo-Saxon Chronicle, translated by G. N. Garmonsway
An official history of Britain copied, distributed, and augmented during the life of Alfred the Great.
"In the year of Christ's nativity 494, Cerdic and Cynric his son landed at Cerdicesora with five ships. That Cerdic was the son of Elesa, the son of Esla, the son of Gewis, the son of Wig, the son of Freawine, the son of Frithugar, the sone of Brand, the son of Bældæg, the son of Woden."
And:
"The Island of Britain is eight hundred miles long and two hundred miles broad; and here in this island are five languages: English, British or Welsh, Irish, Pictish, and Latin."

De Atjeh Oorlog, deel 1, door E. S. DeKlerck
"The Aceh War, Part 1." Bluntly put, we Dutch were not as civilized then as we pretend now to be.

The Road to Khartoum -- A Life of General Charles Gordon, by Charles Chenevix Trench
Chain smoking alcoholic heads into a dark place, doesn't make it out alive. England worships at his altar. Derring-do, gung-ho, rah rah the empire!


Plus, of course, frequent ventures into volumes of Sherman's Lagoon, Pearls Before Swine, and The Piranha Club (Ernie). All of which are instructional for modern times.